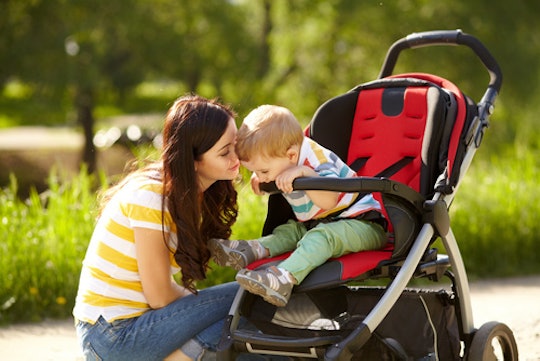 No, You're Not Allowed To Touch My Child

There is a woman I see every morning on the walk to daycare. She seems nice enough, and she thinks my daughter is really cute. The problem is she thinks my daughter is so cute that she has the right to touch her without asking. She reaches out and strokes her cheek, tickles her belly, or squeezes her hand almost every time we see her. I do my best to stop her, but I don't always get to it in time. My daughter doesn't hate it — at least, she doesn't cry and scream. But she clearly doesn't love it, either, because while she may continue to smile, she also hides her face or turns away. I would like to tell this woman, "Look, I know you mean well, but you're not allowed to touch my child — not only because you don't have their consent, but also because she has special needs, and it might threaten her life."

The woman on our walk to daycare might think she knows my daughter, because she sees her every morning. But if she really knew her, she would know that my daughter has four congenital birth defects that affect her brain, including agenesis of the corpus callosum (ACC), an underdevelopment of a structure of her brain that passes information between the left and right hemispheres, which can cause developmental and cognitive delays. She also has another disorder that puts her at increased risk of seizures. My daughter is not cognitively or developmentally delayed, and she has never had a seizure before. But she is and will always be at risk, which is why people need to take extra care when interacting with her.

To be clear, it is not appropriate for anyone to touch a baby, toddler, or child without that child's (or their parents') consent. Yet when a person touches a child with special needs or medical complexities, they are doing more than simply violating that child's bodily autonomy. They are putting that child's health, and in many cases their life, at risk.

Being a mom to a child with special needs has introduced me to many other children who are just as medically complex. And it has taught me that touching children with medical complexities or special needs could not only possibly agitate or confuse them, it could also potentially lead to them developing serious, life-threatening infections, or even inducing seizures (through stress or reflex epilepsy triggers).

To be clear, it is not appropriate for anyone to touch a baby, toddler, or child without that child's (or their parents') consent. Yet when a person touches a child with special needs or medical complexities, they are doing more than simply violating that child's bodily autonomy. They are putting that child's health, and in many cases their life, at risk.

Mom Hillary Savoie, from upstate New York, has a daughter with epilepsy and visual impairment, who is non-ambulatory and non-verbal. (Full disclosure: Savoie also contributes to Romper.) She is also a risk for repeat infections. When Savoie's daughter was younger, Savoie was primarily concerned that people who touched her would spread germs. "People have a casual relationship with germs and kids," Savoie told Romper. "People often say, 'Germs are good for them.'" But in her daughter's case, the germs from a stranger's touch could have landed her in the hospital.

Savoie's strategy for warding off strangers who try to touch her child depends on her mood. Sometimes, she'll joke around and simply tell people to be careful, because "she might bite you." Other times, she'll explain that her daughter's immune system is compromised, so it's important not to touch her.

In addition to potentially putting their health at risk, touching a child with special needs without their permission can potentially cause them to become agitated and frustrated, particularly if they struggle with sensory input issues. Mom Darla Strong has a daughter with dysgenesis of the corpus callosum, or a partial absence of the corpus callosum. She becomes highly agitated when she is touched without giving her permission. "If she is touched on the back it is almost appears as if she is itchy," Strong said. "She starts hitting the spot where she was touched."

Stacey Butler, who lives in Lincolnshire, United Kingdom, has a daughter with Ohtahara Syndrome, a rare form of epilepsy, as well as a number of secondary conditions, including visual impairment, respiratory complications, and a movement disorder. On top of being at increased risk for infection, Stacey's daughter is also highly sensitive to touch and other stimulation, so if a stranger touches her without any prior warning, this startles her and sends her senses into overdrive, possibly inducing seizure. To prevent strangers from touching her daughter, Stacey made a bright-pink badge for her that reads: Please don't touch me. I've been very poorly. Thankfully, it works.

Children with disabilities are more likely to experience violence because of "stigma, discrimination, and ignorance about disability, as well as a lack of social support for those who care for them."

It is especially important for strangers to avoid touching kids with special needs because it is crucial for these children to know they are in charge of their own bodies. Children with disabilities are four times more likely to experience abuse than non-disabled children, according to the World Health Organization (WHO). Children with disabilities are also more likely to experience violence because of "stigma, discrimination, and ignorance about disability, as well as a lack of social support for those who care for them."

If a child with special needs has communication impairments, that increases their risk of experiencing violence, simply because they cannot speak up for themselves. Savoie explains that because medical intervention is a regular part of a medically complex child's life, they are often "handled" by medical staff or their parents, who are forced to do things to their bodies in the interest of providing care, often without obtaining permission beforehand. That's why it is crucial that people respect her child's wishes any time she signals she does not want to be touched.

In a perfect world, everyone's bodily autonomy would be respected, regardless of age or mental or physical ability. But we don't live in that perfect world, and children are regularly touched without their explicit consent. That can be irritating for many children, but it's potentially devastating for kids with special needs. And because many disabilities can be invisible, you can never know on sight whether a child falls into this category.

At the end of the day, babies, toddlers, and children are all human beings who deserve respect and bodily autonomy, and they deserve to have their consent recognized.

I wish I'd had the guts from the beginning to be straightforward and tell people not to touch my kid and respect her space. I regret so much that instead of enforcing my daughter's right to her own bodily autonomy, I stayed silent to keep the peace with someone I barely knew.

The parents of medically complex children shouldn't have to create signs to protect their children. They shouldn't have to tell complete strangers about their child's condition or their susceptibility to infection and field rounds of follow-up questions or expressions of sympathy and pity. They should have their privacy and their personal space respected. Because at the end of the day, babies, toddlers, and children are all human beings who deserve respect and bodily autonomy, and they deserve to have their consent recognized.