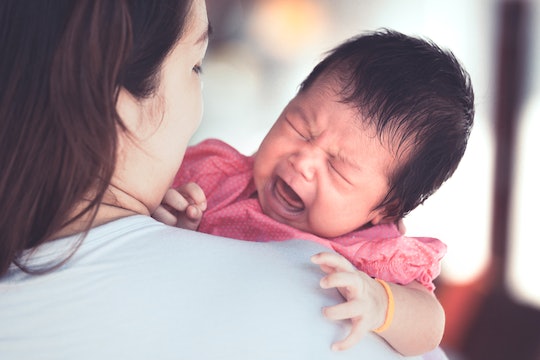 The Research Is In & Yup, Parenting A Fussy Baby Takes A Toll On Moms' Mental Health

Being a parent is no easy job, especially if your baby is particularly fussy. The first few months of my son's life were a blur of tears — for both of us. He cried and screamed incessantly, and for a while I thought we weren't going to make it through. We did, and it turns out I'm not the only mom who's ever felt that way. Shocking, I know. But a new study has confirmed that fussy babies do take a mental toll on moms, and I'll wait while you come to terms with that groundbreaking discovery.

In all seriousness, the study — recently published in the journal Academic Pediatrics — pulled data from more than 8,200 women who were nine months postpartum. Researchers ultimately found that moms of fussy babies born full-term were almost twice as likely to say they'd experienced moderate to severe depressive symptoms as compared to moms of "easy" babies. And moms of pre-term babies also reported more depressive symptoms than those of non-fussy children, according to the study.

According to C.S. Mott Children's Hospital, there are a number of reasons your baby may be seemingly more fussy than most. The hospital states, "All babies cry," which no mom really needs to be told, but it's still nice to hear from time to time.

Specifically, the hospital noted that babies tend to cry the most between 2 weeks and 4 months old, and their cries can be a sign that they something, is experiencing discomfort, or is "bored." Even more specifically, according to Mott Children's Hospital, babies cry when they're hungry, hot or cold, wet or soiled, spitting up or vomiting often, sick, or want to be entertained.

Then there's colic — which also presents through ceaseless crying — that could be the reason your baby is fussy, according to the hospital.

As many as half of all babies have colic, according to Medical News Today, and it's usually brought on by gas or immature nervous systems. According to the news outlet, colic typically lasts a number of weeks, and can be treated through some home treatments.

The study's senior author, Dr. Prachi Shah — a developmental and behavioral pediatrician at Mott Children's Hospital — said in the study, according to HuffPost, that moms of fussy babies tend to "have lower self-confidence, feelings of lower efficacy" and "they may also feel "more depressed and more stressed."

Of course, moms shouldn't have to spend weeks in the NICU to get some much needed mental health support, but Shah's conclusion certainly makes sense and bringing awareness to this hopefully will help.

There are two key takeaways from this study, as Shah told HuffPost. The first is that fussiness should be taken seriously, not brushed off. The second is that pediatricians and health care providers should be speaking to parents and supporting ones with difficult babies.

Shah suggested in the study that parents with fussy babies speak to their pediatricians about the issues they're having. Your child's doctor can help get to the root of the problem, if there is one, and make recommendations for moms who are spread a little thin from tending to a fussy baby day and night.

According to the University of Michigan, Shah explained of the study's findings:

Pediatricians and providers should pay close attention to mothers who describe difficulty soothing their babies. Early interventions may help reduce the risk of maternal depression that negatively impacts a child-parent relationship and that may be harmful to both the health of a mother and child.

I was fortunate to have a good pediatrician who supported me while also trying countless remedies for my son's fussiness. Once we learned that he had colic, a milk protein allergy, and reflux, and found ways to soothe or treat those issues, things settled down, tears dried up, and everyone started getting a whole lot more sleep.

Not every mom is as lucky, however, and there are resources out there beyond judgmental playgroups, mommy blogs, and Facebook groups. According to HuffPost, Shah recommends the Fussy Baby Network, an organization that offers support to parents around the country via phone. There are also therapists who specialize in parenting issues, which is another great options for stressed out moms.

As for your fussy baby, there are ways to soothe them as well. According to the American Academy of Pediatrics, swaddling can be helpful in making babies "feel secure," and stop crying. The AAP also recommends holding your baby on its left side to help with digestion or stomach issues, as well as walking with your baby, avoiding overfeeding, pacifiers, and diet changes.

The truth is, there's no book or study that can fully prepare you for becoming a parent and all the issues that will arise. Every baby is different, and what works for one child, or mom, might not work for others. The best thing you can do for yourself is be open, honest, and extremely patient through the process.

Eventually, you'll fall into your rhythm. My son is 6 now, and those long, hard months feel like a distant dream... or nightmare, I should say. You'll get through it in time. Just hang in there.