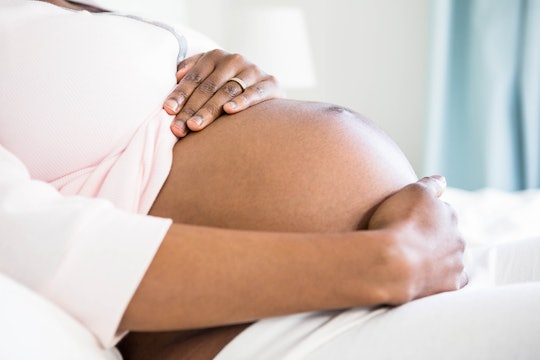 Pregnancy is generally considered to be a time of unbridled joy and excitement. And though it's often accompanied by a lot of happiness and celebration, there's no question that it can be a complicated time as well. For some, both pregnancy and the postpartum period can also trigger mental health struggles. And while they're often treatable, and certainly not uncommon, perinatal mood disorders are still not talked about enough. But, as NPR recently reported, new recommendations for pregnancy-related depression show that better screening strategies could help identify women at higher risk.

On Tuesday, Feb. 12, the U.S. Preventative Services Task Force published the recommendations in The Journal of the American Medical Association (JAMA). In its report, the panel of clinicians and researchers encouraged health care providers to "refer pregnant and postpartum persons who are at increased risk of perinatal depression to counseling interventions" such as cognitive behavioral therapy.

The idea? By identifying those who may be more likely to develop depression — and then refer them for counseling — providers can actually help keep them from developing the crippling condition. And the recommendation definitely seems valuable; according to Science Daily, perinatal mood and anxiety disorders (PMADs) are "the most common complication of childbirth" in the United States.

In fact, while statistics can vary, the U.S. Preventative Services Task Force estimated in its report that roughly 8.9 percent of pregnant women, and 37 percent of women in the first year postpartum can be affected.

Not only does that mean an awful lot of suffering for mothers, it also means potential consequences for their children. As the JAMA report noted, depression during pregnancy is linked to "an increased risk of preterm birth, small for gestational age newborn, and low birth weight." The report also noted that babies born to mothers who experienced depression during pregnancy may be more likely to have "behavior problems, lower cognitive functioning, and [an] increased risk of developing psychiatric disorders."

Developing depression in the postpartum period also comes with its own set of concerns. The researchers noted in the JAMA report that women who are depressed "exhibit significantly higher levels of negative maternal behaviors" towards their infants, and their babies are less likely to received preventative health services, like vaccinations.

But the good news, according to the report, is that when women at higher risk for developing depression received counseling, they were 39 percent less likely to actually become depressed.

Of course, even though counseling can help, there are still many barriers for women who need to access mental health assistance during pregnancy or the postpartum period. For one, mental health stigma and lack of awareness contribute to it going undiagnosed far too often, even when a woman is already actively experiencing symptoms of clinical depression.

According to ABC News, half of all women in the United States suffering from perinatal depression remain undiagnosed and untreated, and screening rates, overall, are low. It's why in December, the American Academy of Pediatrics released a statement urging doctors to screen pregnant women and new moms for depression "during the infant’s well visits at 1, 2, 4 and 6 months of age."

The report's findings also raise an important point for the general population. After all, as much as depression can cause significant issues, there really are options for both treatment and prevention, like counseling. Though it may not necessarily be a guarantee, being aware that perinatal depression is something that we can take a proactive approach to may help women potentially avoid ever having to suffer in the first place.