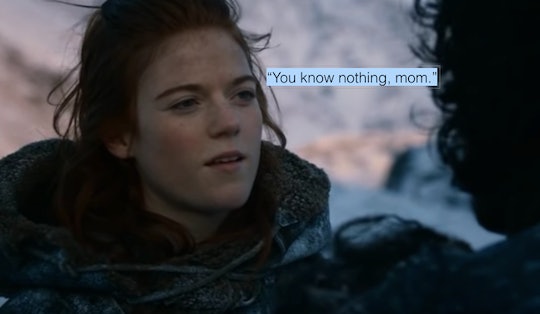 The Power Of Telling Kids "I Don't Know"

Just like Socrates and Jon Snow, I know nothing. Thankfully, I'm in good company, because parents don’t know everything and I'm a parent so the whole "know nothing" thing is kind of my natural shtick. And if we're just honest with our children about our own ignorance we can impart a few teachable moments on our kids... and ourselves.

"Confucius said that the mark of wisdom is to act like you know what you know but admit you don't know what you don't know," Bryan W. Van Norden, philosopher, author, editor, and translator of books on Chinese and comparative philosophy, tells Romper. "One of the big problems in our society is people refusing to admit what they don't know. To fix this, we have to teach people that admitting ignorance is a strength, not a weakness. And teaching people about that strength can start at home with your kids."

But what do you say when your curious 10-year-old can’t help but ask 30 questions a minute, each more specific than the last, about the details of some obscure leaf species they found crumbled in the bottom of their rain boots? Van Norden says to keep it simple.

“Say something like, 'I don't know. But that's OK, because no one knows everything. Let's try to figure out together how we can learn the answer.'" Then you can take a trip to your local library, or ask your smart phone (that was probably already listening to you anyways) and show your child how to find the answers to their questions.

No one appreciated that one "know it all" in grade school, and Ian Olasov, philosophy professor and organizer of Brooklyn Public Philosophers who studies the philosophy of language, social epistemology, and public philosophy, tells Romper that raising your child to be "intellectually humble" is important.

“On the one hand, you don’t want to be overconfident. If you think you know something, and it turns out to be wrong, it’ll be really hard for you to change your mind," Olasov says. "But if you admit that you’re uncertain about some idea, and later you acquire some new evidence which pulls you one way or the other, you’ll be able to respond to that evidence more nimbly.”

This is important for children because, as Olasov says, “it’s not just about having the right beliefs; it’s also about making the right decisions. We have to learn how to make the best choices we can with the information and brain power that we have." You can help your child make the best choices by "getting clear about priorities, trying to get the most decisive considerations on the table as quickly as [possible], and knowing when to move on," Olasov continues. "This takes practice. Admitting that you don’t know is a step in the right direction.”

We teach the fear of not knowing, which, in turn, breeds ignorance born of this fear.

Anna Gotlib, Ph.D., philosophy professor and editor of the International Journal of Feminist Approaches to Bioethics, tells Romper that the consequences that some children face when they don’t know something can be difficult to overcome, and can erase any incentive to admit that you're not automatically "in the know."

"A fear of not knowing, of being somehow 'behind the times,' of being too slow, or maybe behind one's peers is something that we teach children from the time they can talk, and maybe even earlier," she explains. "In other words, we teach the fear of not knowing, which, in turn, breeds ignorance born of this fear.” To change this, we can start by leading by example as moms and showing our children that it’s OK to not know things.

For example, try telling your child a story about a time that you didn’t know something, so that you can normalize these inevitable “I don’t know” moments, Gotlib suggests. “And then talk about all the ways that a child has to get the information that they are seeking, emphasizing that someone usually knows something that they don't. And vice versa.”

In an age when kids grow up in homes with smart devices that can Google things for them — and access to the internet on screens that fit in the palm of their hands — curious kids can develop into young researchers. Especially if they understand that not knowing something is the first step on the journey towards learning. Consider the benefits of, as Olasov says, “getting kids to see themselves not just as consumers of knowledge other people have produced, but as people with the power to create new knowledge themselves.”

So whether you have a curious toddler or a middle schooler who somehow only asks you questions about things you’ve never heard of, don’t look at your lack of information about a topic as something embarrassing. Instead, look at it as an opportunity to learn something new with your child.

Anna Gotlib, Ph.D., philosophy professor and editor of the International Journal of Feminist Approaches to Bioethics.