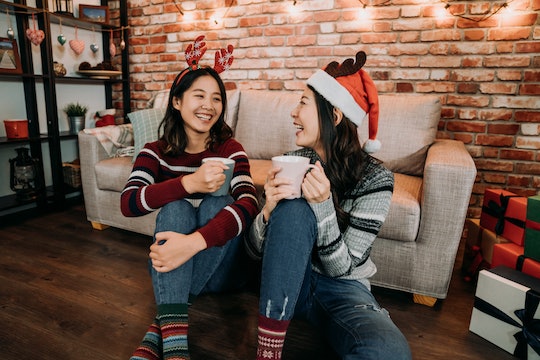 Hey, Let's All Stop Asking People About Their Reproductive Choices This Holiday

Scene: A holiday gathering. The mood is cozy and charming. Family members you don't always get to see (at least not as often as you'd like) are all together at last, enjoying a favorite holiday treat in the glow of decorative lights. A new baby does something adorable and everyone coos. Then it happens. Someone (a grandma, parent, or even you) turns to your child-free sister/cousin/friend, smiles mischievously and asks "So when are you having a baby?" Record scratch. Everyone, let's make an agreement here and now: Stop asking other people about their reproductive choices this holiday. Because no. No. A million times no. The only thing it really does is guarantee that you're going to put a damper on someone's merriment. Let us delve into depths of all the reasons this question (or any variation of this question) is not OK.

This plea could begin and end with a single sentence: It's none of your business. Seriously, that's reason enough. Add on top of the fact that it's a deeply personal and potentially touchy subject and you have even more reason to never ask someone about their reproductive futures (or present or past, for that matter). But let's say you're just one of those Questioning Quentins who needs to know the exact reasons for all the things. (Even things that are really none of your business, Quentin.) OK. Let's go.

For starters, just on a conversational level, it makes absolutely no sense to talk to someone about the things they're not doing and have not expressed an interest in. Like, if we were all sitting around the holiday table and I just leaned in and conspiratorially asked you "So... when are you going to take up basket weaving?" or "When do you think you're finally going to hike the Appalachian Trail?" You recognize this would be very strange, right? So asking someone when they're going to have a baby (or if they're going to have a baby, or expounding upon all the reasons they should have a baby) is at the very least just plain weird. But, because of societal pressures and expectations and the fact that a baby is generally far more long-term than hiking Appalachia (unless you take it super slow, I guess), it's more than weird. It's presumptuous and rude.

Secondly, maybe these folks don't want kids, but they know that if they say that then they're going to wind up in a debate with a baby-loving loved one. And look, I adore my children, love parenthood, and I even (usually) enjoy parenting. And this is perhaps never more true than around the holidays. I'm on record as saying that I think having kids makes this time of year magical, perhaps even more magical than it was when I was a child and legitimately believed an immortal elf-man was going to break into my house and leave presents under my whimsically decorated evergreen. So I kind of get your impulse — you love having kids and you're so overwhelmed by your love that you want others to be able to experience that, too.

But you know what else I love? Takoyaki. It's a Japanese street food and I can best describe it as an octopus-filled doughnut topped with a special sauce, mayo, and dried fish. It is delicious in ways I cannot describe. Like parenthood, having takoyaki in my life has improved every aspect of my existence... but, also like parenthood, I recognize that it's not for everyone, so I don't go around insisting everyone give it a whirl.

There are a ton of good reasons to have to children, but there are also a lot of good reasons not to, all of them valid — money, personal time, physical and mental health, career, lifestyle, traveling, and simply not wanting kids. If someone has no reason for not reproducing except "Meh. Don't feel like it," that doesn't have to be delved into or analyzed or questioned. That's good enough.

A final, compelling reason you should not go on poking people on the subject of their reproductive life: maybe they do want a baby. Maybe they're pregnant and not ready to tell people yet. Maybe they're trying really hard to get pregnant but it's just not happening. Maybe they've recently been rejected by an adoption agency. Maybe they've had a miscarriage... or two... or nine. Or maybe one person in a couple really wants a baby and the other doesn't and it's a source of contention for them. Or maybe they desperately want to have a baby, but a particular health concern is holding them back. My point is, you never know what's going on behind the scenes, and commenting on only what you (think) you see is a great way to ruin someone's holiday or prompt them to excuse themselves to sob in the bathroom. Because we live in a society that makes people think they can blithely comment about other people's reproduction and also shames anyone who experiences problems getting or staying pregnant into hiding their pain and suffering in silence.

Again — this entire subject could begin and end with "none of your business," but I'd like to end on a point that, while perhaps not the most significant, may be persuasive...

This person thinks enough of you to spend a holiday at your side. Maybe they even bought you a present! You mean something to them and they to you — why would you want to open up a subject that makes them feel uncomfortable, heartbroken, or judged? And do you think you're the only person asking? I assure you, they get this a lot, not just from strangers and acquaintances, but from other friends and family members. And even if they aren't hearing this question directly, the general vibe of society is waving their lack of baby-having in their faces because, despite not always being family-friendly, American culture is tremendously family-centric. We (the collective we) expect adults, especially adult women, to have children. And for people who have decided that's not their best option (for whatever reason — remember, they're all valid), the social pressure can be a lot to handle. Do you really want to add to that?

Surely 2018 has given us plenty to talk about without probing someone else's reproductive decisions for conversation fodder. Lots of great books and movies came out. Talk about Black Panther or A Quiet Place. Remember when Banksy shredded a painting as it was auctioned off at a $1.4 million? That should be a good conversation! Or what about all the things you've accomplished this year? I'm sure people would like more details than you provided on social media. What about everyone else? Hey, you remember your child-free loved one enjoys painting — have they continued with that since the last time you saw them? How is that going? And did you remember correctly that they took a trip to Hawaii in July? What was that like? Would they recommend it? Is anything new at their job? With their friend?

You are their family, chosen or blood. You should be their safe space. A person who makes them feel loved and comfortable, not pressured or judged. Be their haven, not one of a million other voices implying they're doing something wrong with their lives.