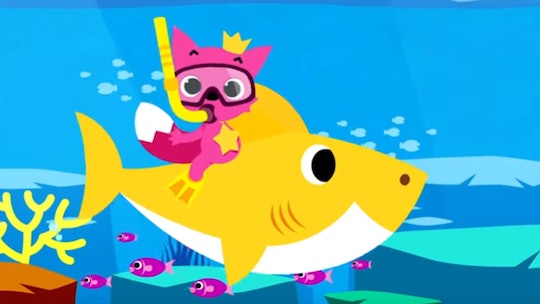 Just when you thought your child's obsession over Baby Shark was contained to YouTube videos you can play and pause as you please, it’s about to branch out into television to make sure that your household has its daily fill of the singing sharks across multiple platforms. And when the Baby Shark TV show on Nickelodeon premieres, you will never be able to get that song out of your head again. This is fantastic news for toddlers who typically drop everything as soon as a Baby Shark video comes on, but parents will definitely find themselves randomly singing "doo-doo-doo-doo-doo-doo" throughout the day and there is just no getting around that.

Right now, it's unclear if the Baby Shark TV show will be called just that or if the kid’s network will dream up some other title to entice young viewers, but it is coming and honestly, I’m surprised it took this long. The first Baby Shark YouTube video came out in 2015 and by 2019, it already had 2.9 billion hits. In January, the song landed on the Billboard Hot 100’s top 40 list and there is Baby Shark merchandise online and in store at Walmart locations across the country. It’s no wonder that Nickelodeon decided to capitalize on the success of what started out as a simple YouTube music video.

Although there aren't many details about the upcoming animated series, according to Entertainment Weekly, SmartStudy, the company associated with Pinkfong which originally produced the Baby Shark song, will be involved in the series somehow. Unfortunately, young fans will have to wait to find out when the Baby Shark show premieres, but if it’s anything like the YouTube videos that started it all, kids will be totally into it from that start.

I'm not sure if parents will be wild about the idea of prolonging that Baby Shark song in their house, but if their homes are anything like mine, the kid typically gets to control YouTube. In general, parents already have mixed reactions to the original Baby Shark content on YouTube.

Some parents welcome the catchy song and sing along with their kid, while others probably hoped that the YouTube video has never picked up so much steam.

Other parents will probably accept the Baby Shark TV show because what other choice is there? If there is a TV show or song that can rein in your toddler for a few minute at a time, sometimes it is a necessary evil.

This isn't the first time Nickelodeon plucked a YouTube success from the Internet to give it a more commercial platform. Ryan ToysReview, which saw ample success on YouTube with short sketch videos and as a toy un-boxing channel featuring seven-year-old Ryan and his parents, was brought to Nickelodeon recently as Ryan’s Mystery Playdate. The Nickelodeon TV adaptation was so successful that in April, it was renewed for a 20-episode second season.

Despite kids’ apparent obsession with streaming YouTube content at will, there is obviously still something to be said for turning on TV to watch their favorite shows and Nickelodeon seems to get that.

The Baby Shark series on Nickelodeon could be centered around learning for preschoolers while featuring the famous song and others like it. I wouldn't be surprised if the sharks take on an almost Paw Patrol-like adventurous attitude, though at this time, it's all speculation. Still, despite parents scratching their heads at toddlers’ love of the Baby Shark videos and songs, according to Fatherly, there is some value in listening to the songs on repeat.

Fatherly reported that the 2018 song "Santa Shark" specifically could do wonders in boosting children’s vocabulary and speech skills. That song alone could potentially help kids better understand verbs and even string together sentences a little more easily. I’m not sure if the same can be said for all of the Baby Shark songs and videos, but clearly there is a way for kids to educationally benefit from the videos. The Baby Shark TV show on Nickelodeon could help drive that home a little more, if only to provide a little something extra for young viewers.

There might be a wait until the new series is actually released, but in the meantime, you can have your toddler play the Baby Shark YouTube videos on repeat for the umpteenth time.

This article was originally published on June 5, 2019