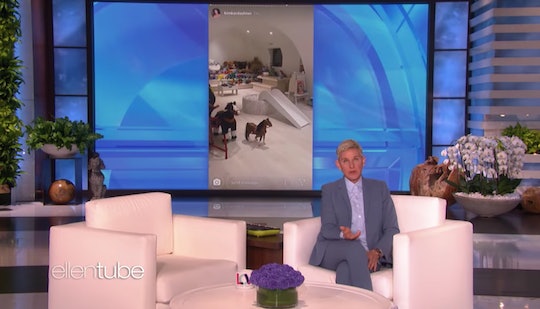 Kim Kardashian recently shared some pretty incredible photos of her children's playroom. They're incredible to look at not only because of all the cool toys, such as some horses and neatly stacked musical instruments, but the room was also so clean and tidy, which is a much different aesthetic than what's seen in other homes across the country. As such, Ellen DeGeneres asked parents to share photos of their own messy playrooms after Kardashian's big reveal—and oh, did they deliver.

Last week, Kardashian took her followers on a video tour of the playroom in her Los Angeles, California home, where she and her husband, Kanye West, raise their four children: 6-year-old daughter North; 4-year-old son Saint; 2-year-old daughter Chicago; and 9-month-old son Psalm. While none of her little ones were in the playroom during the tour for her Instagram story, Kardashian explained that she wanted to let people see it because, "I'm cleaning up for the night, and just because you guys always say my house is always so, like, minimal, [but] you guys haven't seen my playroom."

Kardashian's comment might give the impression that her playroom is a mess or disorganized, but a brief scan of it is basically like looking into a perfectly organized fantasy room of every small child everywhere. Or as DeGeneres described it, "totally normal if you live inside a super clean FAO Schwartz."

While Kardashian should certainly not be judged for having a tidy playroom for her children, it's interesting to see the other side of that particular coin. When DeGeneres asked parents to share photos of their own playrooms, some of the results that showed up on The Ellen DeGeneres Show might feel eerily recognizable to busy parents with small kids.

In one photo, a little girl is pictured passed out in the middle of her playroom taking a nap, despite the fact that her mother asked her to clean. Another playroom floor features a new "decoration" that is also called marker on the carpet. DeGeneres noted the second photo looked like something straight out of CSI.

One mom who sent a photo of her daughter's bedroom tried to stay philosophical and noted, "It could be worse, right?" DeGeneres pointed out it probably could be because "at least she put herself away." (In the photo, her daughter is sitting in a big pink bin.)

As for another parent, their son "destroyed his room in minutes," and if you look closely you can see that even the cat is distressed. Sitting on the top step of the bunk bed with no clue where to go amid all the mess (including some old empty Pepsi cases, because everyone knows how much fun they are as toys).

I suspect even Kardashian's playroom looks like a tornado went through it at one point or another, particularly since she has four small kids. But these photos of "real" messy playrooms from other parents will hopefully help others laugh at the chaos and feel like it's OK when your kids make a mess. And they're probably not going to clean it the way you would like, anyway — so what can you do, right?