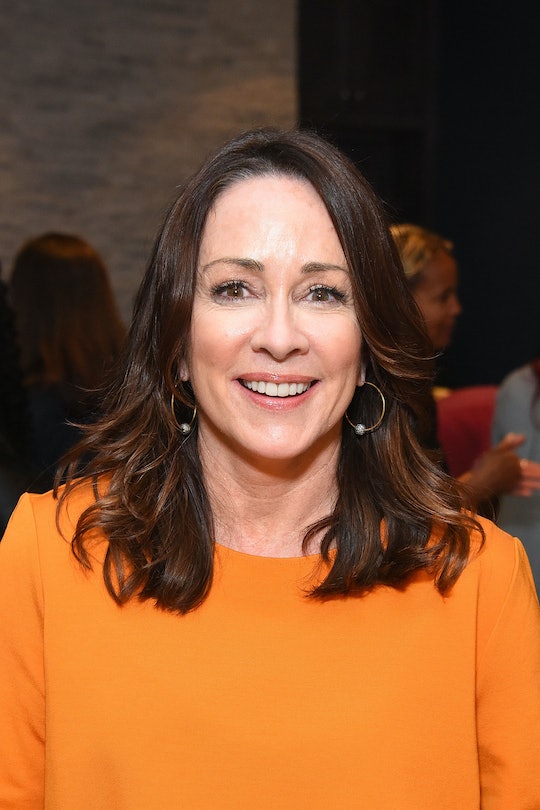 Establishing yourself in Hollywood isn’t easy, but Patricia Heaton has definitely become a fixture. The accomplished actress has starred in several hit sitcoms and she’s preparing to embark on a brand-new journey. In CBS' new sitcom, Carol's Second Act, Patricia Heaton plays a character named Carol, a 50-year-old mother who's looking to start anew after she and her husband divorce. With her kids out of the house, she decides to follow her dreams and become a doctor, starting out as a medical intern. Beyond being entertaining and funny, Heaton's character and her storyline speak to a very real and relatable truth about being a mom: Yes, raising children is a full-time job, but with a dream, a good support system, and a little faith in yourself you can do so much more.

Of course, Heaton is known for her roles on iconic, beloved sitcoms like Everybody Loves Raymond and The Middle. And when it came to her newest role, Heaton tells Romper in a phone interview that Carol's Second Act — written by Emily Halpern and Sarah Haskins, who Heaton gushes are "wonderful" — has essentially given her an opportunity to "have something new to say in the comedy landscape."

"[Halpern and Haskins] came to me with this idea about a woman of a certain age who, instead of retiring into book clubs and white wine decides to challenge herself and pursue her lifelong dream of becoming a doctor," Heaton shares.

For Heaton, the role wasn’t a huge stretch. While she’s happily married to her husband David Hunt, and has never been to medical school, her children are grown and she’s faced a number of the same challenges Carol faces as the oldest intern in the bunch.

Heaton tells Romper that while we haven’t quite reached a point where women are fully equal to men, women are living longer than ever and are being presented more opportunities at every stage in life. There's certainly still more work to be done, of course, but she says that older women bring a lot to the table, and that was something she wanted to explore more in front of the camera.

"I, myself, am an empty nester as Carol is and I think we’re in a time right now where, after the #MeToo movement, women are experiencing much more opportunities and it’s also an age where we’re healthier longer so once we’ve sort of done what we thought was our main job in life: the career, the marriage, and the family, we find that ‘oh God, we still have a lot of time left,’” Heaton, who's mom to four sons, tells Romper.

She continues, “And as women of a certain age, we have a lot of wisdom and experience to offer the world and I think that’s an important thing and something that I really want to explore and I think this show is the perfect way to [do that].”

Indeed, the trailer for the CBS sitcom shows Carol making light of her unusual situation on several occasions. In one particularly telling scene, she faces off with her chief resident after showing compassion, as mothers are known to do pretty well, to another intern's patients. Carol refuses to "apologize for helping," and appears to accuse her resident of being ageist.

"You think a woman my age should just disappear into the woods and knit," she shouts in a hilarious fit of stress, anger, and confusion, only to receive a thanks from the senior doctor. "Giving bad news is difficult. You handled it well," the resident responds.

The show, specifically Heaton's character, speaks to moms' compassionate, nurturing nature — sometimes perceived as weakness in the professional realm. But it also shows that there can be more to life than raising kids, if that's what you want, and that it's never too late to start doing the things you always dreamed you'd achieve if only you had the time. Indeed, as Heaton shares, we can always learn from others: "There’s so much opportunity and so much need for people who have lived these lessons to share with [their] community and society."

She continues, "I know for me, as my kids have moved out of the house, I’ve been working with World Vision — the largest [non-government organization] in the world and the largest provider of clean water — so [I] now have the opportunity to travel more because the kids are out of the house. So, that’s part of my second act."

Another part of her “second act”? Producing. Heaton serves as producer on Carol’s Second Act. Although it’s her first time in such a role, she took to it quickly and was excited to see the show through from conception to production. "It’s a new challenge for me," Heaton shares. "I’ve learned so much from my fellow producers... It’s a very exciting time to be able to continue my growth as an actor and producer.”

She continues, “We’re living in a time where, especially in the entertainment industry where as a woman gets older it used to be that you [were] kind of put out to pasture... For myself personally, I’ve never had more opportunity than I have today.”

Heaton’s second act isn’t just taking place on screen. In addition to her upcoming show, she’s also working on a line of homewares with Walmart, Patricia Heaton Home, which she says was born out of her passion for “creating a space for family and friends.”

Heaton tells Romper she was keen to deliver something elegant for folks looking to step up their design game, but keep things affordable. “I wanted to bring that sort of fun, popping, Southampton kind of vibe for my first collection," she says. "I think summertime is a time to celebrate. It’s all about relaxing, about vacation, about hanging out with friends and family, and I think it’s fun to have a little bit of fresh elegance at a really affordable price."

Indeed, the designs for Heaton’s first line with Walmart are bright and bold, just like her. And it's refreshingly affordable; for example, a 20-piece gold satin flatware set is just $30.

Heaton’s own "second act" is shaping up nicely, and should serve as an inspiration to all moms considering getting out there and chasing a dream — whether your children are grown and out of the house, or still in your care. Carol's Second Act, as well as Patricia Heaton Home, are testaments to the things moms can achieve if only they believe in themselves and take the leap of faith.