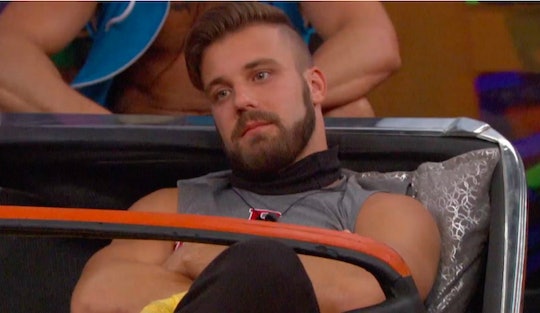 Until Wednesday's episode of Big Brother 18, we hadn't seen much in the way of emotion from Paulie unless it was in the form of being aggressive or confrontational. But then, Paulie cries over possibly being evicted on Big Brother 18 and it's like opening the floodgates. Suddenly we have real tears from Paulie, but it's only now, when he's in danger of being evicted from the Big Brother house. It wasn't when Zakiyah was going home or when anyone else who was aligned with Paulie was in danger, but only now. And, as to be expected, the Twitter reactions to Paulie crying are everything.

On the one hand, just as to be expected from Paulie's fans, there is sympathy for the devil in this case. Seeing a self-described "champion" who was "born and bred" for this break down more than once and confide in his Big Brother BFF Corey is hard to watch. But on the other hand, it's only hard to watch because it's hard to even care about Paulie at this point. He made his bed and now, after burning too many bridges with his fellow houseguests, he's seeing the effect of everything he's said and done in the Big Brother house.

Paulie has chosen now to show real emotions, including tears, and Twitter shares some of that, because Twitter has chosen to turn against him, which is as overdue as his eviction from the Big Brother house. After always getting on Tiffany or Michelle for their own fits of crying, here we have Paulie crying multiple times in one episode of Big Brother. What a treat, right? At least, that's what some of those on Twitter have agreed about.

It's also hard to not think about all the tears Paulie could have shed for the woman he was in a showmance with just one week ago, but nah. Today, his tears are supposedly for Corey, of all people in the Big Brother 18 house.

Also Those Who Are Wondering Where His Emotions For Zakiyah Were

At this point in the show, we're all pretty emotionally invested in the houseguests, so seeing Paulie switch gears and break down is causing us to feel all the feelings too. Only, most of us are pretty over Paulie by now, so no one really cares that Paulie cried on Big Brother 18.

And Some Are Just Ruthless At This Point

Once upon a time, we might have felt sorry for Paulie, but the reason that almost everyone in the house is after him is because of his own mouth that does not shut up and this complex he has about being some amazing competitor and champion for Big Brother. Granted, he's done pretty well up until now, but his sh-t talking caught up with him and in the end, he said way too much to too many people. So Paulie can cry on Big Brother all he wants, but it isn't going to change the other houseguests' or the fans' minds about him.