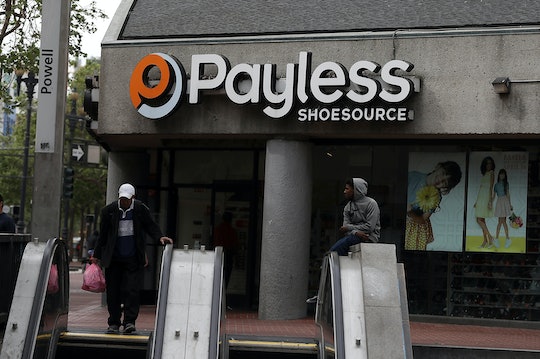 Payless Is Closing All Of Its Remaining Stores, & Twitter Has A Lot Of Feelings

The past few years has been rough for several major retailers in the U.S. And that's an understatement. Between Toys "R" Us, Sears, and Gymboree all going out of business, it seems like nothing is safe in this age of cut-throat competition and online shopping. Unfortunately, it looks as if yet another beloved brand is going under. That's because Payless is closing all of its remaining stores — and Twitter has a lot of feelings.

As NBC New York reported, Payless ShoeSource announced on Friday, Feb. 15 that it will be closing all 2,100 stores in the U.S. and Puerto Rico. The discount shoe retailer will also be shutting down e-commerce operations. Liquidation sales will begin on Sunday.

As USA Today reported, the number of retail stores already scheduled to close in 2019 will almost double with this addition of over 2,000 Payless locations. It's also the largest amount of stores to close from a single chain this year. "We expect all stores to remain open until at least the end of March and the majority will remain open until May," the company told USA Today. "This process does not affect the company’s franchise operations or its Latin American stores, which remain open for business as usual.”

As Forbes reported, Payless initially filed for bankruptcy back in 2017 and immediately closed 400 stores in the U.S. and Puerto Rico. "This is a difficult, but necessary, decision driven by the continued challenges of the retail environment, which will only intensify," Payless CEO W. Paul Jones told the publication at the time. It had planned to "aggressively manage" the rest of its locations, which included closing over 200 more stores. But clearly, this wasn't enough to save the company in the long run (a familiar scenario in recent years).

Some Twitter users were clearly devastated by the loss — in a way that makes it seem like they're losing an old friend. One person tweeted, "PAYLESS SHOES IS GOING OUT OF BUSINESS?!?!!? NOOOOOOOOOOOOOOOO."

Another Twitter user wrote, "If Payless closes where the hell is everyone who only goes to church on Easter suppose to get their shoes."

Yet another person tweeted, "Got my first big-kid job out of college wearing Payless shoes. RIP, my sweet, cheap friend."

Others were legitimately concerned about the lack of retailers who sold affordable shores. And who can blame them? One Twitter user commented, "This is sad. Payless is one of the few retailers that sells affordable shoes in larger sizes. I wore Payless shoes back when I was barely making enough to make ends meet, because they were the only place I could find shoes in my size and price range."

Another Twitter user wrote, "I am legitimately sad about Payless. Half of the shoes I own are from there... because I'm cheap and fabulous."

Still others (although they were in the minority) were apparently not fans of Payless ShoeSource to begin with. One Twitter user wrote, "I’ll miss the good times when I used to walk past Payless Shoes in the mall wondering who actually shops there."

Another person tweeted, "Who’s really sad about Payless Shoes going out of business? I’m like... "

*Raises hand* I haven't stepped foot in a Payless ShoeSource in quite a few years — but it's still sad to see a brand like this die off, isn't it? Granted, I'm nowhere near as devastated about the demise of Payless as I was when Toys "R" Us closed its doors.

More Like This
Old Navy’s Black Friday Deals Will Save You So Much This Year
I’ve Been Searching For Actually Cute & Comfy Wide-Calf Boots For Years...
Jason Ritter's Family Cannot Appreciate His Culinary Talents
All The Nights The Grinch Airs On TV In 2022