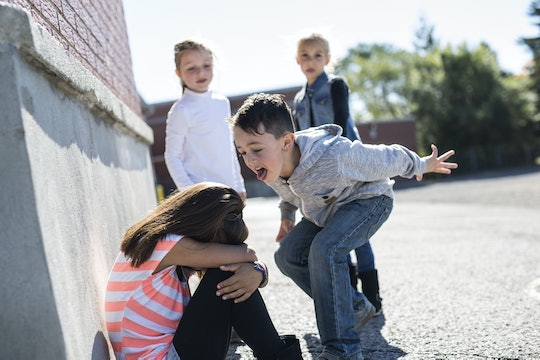 Bullies who roam the halls of Pennsylvania schools may soon start facing serious repercussions for their actions — rather, their parents will. A member of the Pennsylvania House of Representatives plans to propose a bill that would punish repeat-offender bullies by fining their parents $500, as reported by The Hill.

Frank Burns, a Democratic Representative for the 72nd District of Pennsylvania announced his proposal in an article on the Pennsylvania House of Representatives' website on Monday. He is proposing the law in an effort to deter students from bullying.

Here's how the bill would work: School administrators would be required to notify parents every time their child bullies someone. The first time, the school may decide how to handle the situation. The second time, parents would be mandated to attend a parenting class focused on bullying, and it would also be suggested that they also attend a bullying resolution conference. The third time a student is caught bullying someone in one school year is when the more drastic punishment kicks in. At that point, the bully’s parents would receive a court citation as well as "a fine up to $500 and/or community service."

“Bullying is underreported and often unaddressed in any meaningful way," Burns said in a statement for the Pennsylvania House of Representatives' article. "When it’s not addressed, bullying can escalate quickly from taunts and hurtful online posts to physical assaults and—in worst cases—suicide. Holding students, parents and officials at all levels accountable is the only way to put an end to this scourge.”

Last year, Burns visited schools in his district, where he spoke to students about bullying and had them sign an anti-bullying pledge. It's clear that the issue of bullying is close to his heart, and his bill proposal is an important reminder that no one should have to tolerate being bullied. He also said in a statement for the Pennsylvania House of Representatives' article:

If holding parents accountable is what it takes to reel in their kids’ bad behavior, then let’s do it... With the advent of cyberbullying making this problem even more pervasive, we can’t afford to sit back and do nothing. No student should ever have to go to school in fear or shame.

Burns has two other bills in the works that he also plans to propose. One bill demands that the Department of Education sets up a reporting system where students could anonymously report bullies. A system like this could make a huge difference, as students who are afraid to speak up would have a safer way of doing so. The final bill would require schools to report all bullying incidents to the Department of Education, so that there would be more accurate, up-to-date data on the matter.

Some may see Burns' proposals as severe, but taking into consideration the statistics on how bullying affects victims, it's clear that these bills could be incredibly effective. In a November 2017 study published in JAMA Psychiatry, researchers studied children who were bullied between the ages of 11 and 16. They found that being bullied was correlated with a variety of mental health issues, including anxiety, depression, paranoid thoughts, and cognitive disorganization, and they concluded that measures to prevent bullying should be taken.

Additionally, a 2013 study published on AAP News & Journals found that students who are the victims of bullying are twice as likely as their peers to experience headaches and stomachaches. Furthermore, researchers have observed a correlation between being bullied and suicide-related behaviors. A 2015 study published by ScienceDirect found that being bullied was associated with an increased likelihood of attempting suicide.

It's clear that bullying can have a number of negative effects on victims, and it's great that Burns is taking serious measures to put a stop to it. If you're wondering how to identify bullying behaviors in your child, here is a list of signs to look out for and how to handle it.