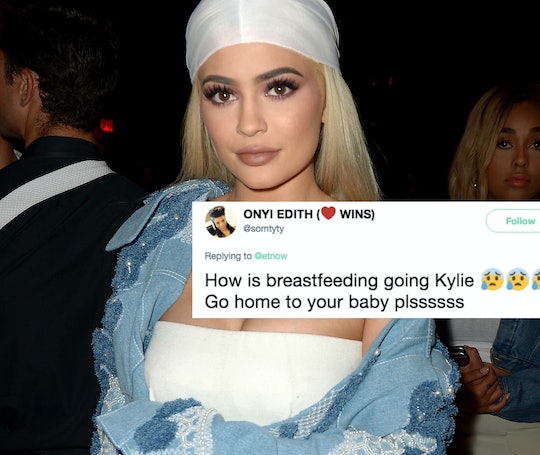 People Are Assuming Kylie Jenner Is Breastfeeding Stormi & Ugh, The Judgement Is Uncalled For

Two months ago, Kylie Jenner gave birth to her first child, a baby girl named Stormi Webster. Those who follow the KarJenners closely will remember that speculation over whether or not she was pregnant was churning for several months because she didn't actually confirm it until after Stormi was born in February. However, as the weeks pass and the 20-year-old reality star and makeup mogul assimilates into her new life as a mom, the speculation has shifted to how she parents her daughter. Most recently, people are assuming Kylie Jenner is breastfeeding Stormi, and the amount of judgement she is incurring is unreal.

Specifically responding to a photo on her Instagram taken at Coachella this weekend, fans and followers have left a slew of messages for Kylie asking where baby Stormi is, and voicing concerns over whether or not she is drinking alcohol in the photo. Though the rationale is sound (experts say that drinking alcohol while breastfeeding can impact the baby's motor development and sleep patterns, according to the Mayo Clinic), what's really an issue is the amount of presumption going on.

Not only are people assuming that they know Kylie is breastfeeding (she may not be), they are also assuming she doesn't know that she shouldn't be drinking (she probably does). And more importantly than both of those things, they have no idea what's actually happening in the photo, let alone her life. In reality, the whole thing shines a light on the way people judge new moms, celebrities or not.

In the photo, which Kylie posted to Instagram on April 15, she is sitting next to Travis Scott on what appears to be a bus of some sort. The detail that has sparked most people's curiosities is the fact that she's holding what appears to be a red plastic cup up to her mouth. The speculation could be triggered by the fact that those cups are usually associated with alcohol, but again, it is just a cup. On the table in front of her there's also an open can, which looks as though it's just a soda, but could of course, also be some form of beer or other canned beverage.

Regardless of what is or isn't happening in the photo itself, the real issue is how followers are responding. The number of comments in which people are asking about where she left Stormi is unreal (should new parents not leave the house nor their kids until they are fully grown adults?). But even more shocking is how many people are scolding Kylie for maybe drinking while maybe breastfeeding.

"Hope that's not alcohol if you breastfeed," one comment read. "I know [you're] a 'celeb' but kids come first."

"I hope you don't drink anything cause it will affect your baby's health. Take care of yourself n Stormi," another chimed in.

"You should be home breastfeeding your daughter. You out here drinking alcohol smh," one more quipped. One more wrote, "You better pump and dumb gurl @kyliejenner."

"Go take care of your kid," said another, with many others echoing the sentiment.

There are so many variables here, it's hard to imagine how anyone could be so presumptive.

Though Kylie hasn't yet spoken about whether or not she is breastfeeding, her sisters have been open about their preference for it. Kim Kardashian has talked about breastfeeding North and Saint, and people are speculating she may even be breastfeeding Chicago. Though she was born via a gestational carrier, it is possible to induce milk production either through nipple stimulation or hormone injections, though Kim has not revealed if she has opted to do either.

Kourtney has also been very open about what a positive experience she's had with breastfeeding, telling Parenting back in 2011: "I seriously could cry just thinking about it being over. I love what a beautiful experience I had with my son [Mason] and just wanted to share it.”

Of course, that doesn't mean followers can glean that Kylie will also be breastfeeding just because her sisters did (and for the record, the same applies to Khloé, who welcomed her daughter last week). What it does mean, however, is that some of the KarJenner sisters have chosen to share that part of their parenting journey with the world, and as of yet, Kylie hasn't. She has no responsibility to anyone to reveal that part of her life, and followers should take it as a cue that they aren't entitled to make assumptions. (People had a similar reaction to a photo of Beyoncé drinking a few months after she gave birth, too.)

Whether Kylie is or isn't breastfeeding is honestly nobody's business, and though it is important to share information about healthy and safe parenting practices, shaming someone on their Instagram page isn't exactly the best way to do so and, more often than not, it's completely uncalled for. The point is that Kylie, like any new mom, is doing the best she can, and evidently enjoyed a night out with her partner, like anyone else would, too.