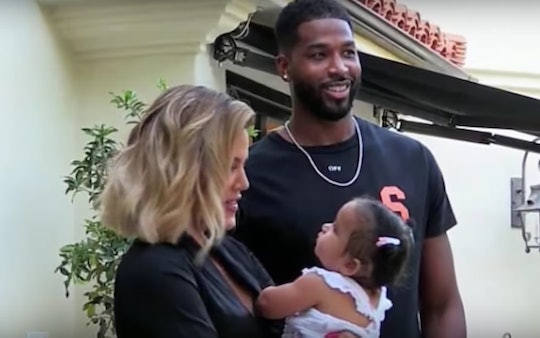 People Are Pissed Tristan Thompson Doesn't Talk About His Son, But They Need To Calm Down

Nothing is ever simple in the world of the Kardashians and Jenners, especially for the people they bring into their inner circle. In the wake of Khloé Kardashian finding out the sex of her first baby on the most recent episode of Keeping Up With The Kardashians, people are now dragging Tristan Thompson for not talking about his first baby. But it's actually really unfair.

Oh, what? Did you forget that the 26-year-old NBA player has a son named Prince Oliver with his ex Jordan Craig? He was born last December, just months after Thompson met Kardashian through mutual friends in 2016. Some people feel like it was scandalous that Thompson would leave his then-pregnant girlfriend and that he doesn't seem to post anything on social media or talk about his son in public. But there are a lot of reasons why that might be.

A lot of people seemed to forget about little Prince Oliver until the episode in which Kardashian found out the sex of their baby, a girl. She said on the episode, "Everyone told me, ‘You’re going to feel what you’re having and you’ll just kind of know.' And then when you find out it’s the complete opposite, it’s just a shock." She added, "I just was convinced that I was having a boy, so to be having a girl, it’s just like, ‘OK, that wasn’t what I thought was going on.’” Then she let it slide that Thompson, too, was hoping for a boy.

Fans took issue with the fact that there was not even a mention from the Good American designer that her partner already had a son.

People Were Not Happy

Alright, can we just back all the way up a minute? There are so many awful insinuations and straight up accusations in these tweets about both Thompson and Kardashian. For one, it's pretty sexist to assume that Kardashian would want to compete with Thompson's ex or pit two future stepbrothers against each other. Just because two women have dated the same man doesn't necessarily mean that they have to compete with each other. Knowing how important family is to the Kardashians, it's even more improbable.

But forget her. What fans really don't know is exactly what went down between Tristan and Craig, or how she feels about having what appears to be full custody of their son together. Actually, since it's not known what kind of custody agreement the former couple has worked out, it's impossible to know why Thompson doesn't post photos of him every day or talk about him on KUWTK.

Also, if Thompson doesn't talk about Prince, it might be that he and Craig have an agreement to keep the infant out of the spotlight. Even Kanye West asked Kim Kardashian to not have North and Saint filmed then they were infants and keep their babies' lives out of the public eye. That's probably what's going on with Craig, Thompson, and Prince Oliver, too. Would you want your baby on cable television or have their faces plastered all over magazine covers?

Craig herself has only posted a picture with her son just twice on social media, once a pic of them in fluffy robes and another of them playing in the pool together. There are so many possibilities for why Thompson and the Kardashians don't mention his first son and none of them have to be scandalous.

Remember, this is the family that had us straight up convinced that Kylie Jenner was off on some desert island all fall, never to return again after fighting with Travis Scott. Then she showed up with family videos and the sweetest pregnancy/birth announcement video ever. For all we know, Thompson hangs out with his son every weekend. But really? It's none of anyone's business.