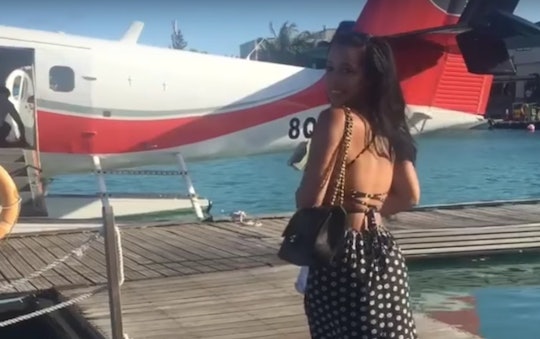 Everything You Need To Know About Tristan Thompson's Ex-Girlfriend, Jordan Craig

On Wednesday, Khloé Kardashian finally revealed that the enduring rumors are true, and she is, in fact, expecting a baby with her boyfriend, Cleveland Cavaliers star Tristan Thompson. But even though this new baby-to-be will be the couple's first child together, he or she already has a brother. Well, a half-brother, that is, as Thompson welcomed a son with his now-ex-girlfriend last year. That probably means that 1-year-old Prince Oliver Thompson's mom will be in the picture to some extent, meaning that Kardashian fans need to get familiar with who Thompson's ex-girlfriend Jordan Craig is, if they're not already.

While I can't say for sure that Craig will have a recurring role on the next season of Keeping Up with the Kardashians or anything like that, her obvious affinity for beauty and nice things would make her a natural part of the cast just, you know, if it ever came up. The 26-year-old runs a lifestyle blog called "All Eyes on Jordy C" that boasts categories such as "Mommy & Me," "Travel Channel," "Fashion," and more. And a quick perusal of her Instagram page shows her rockin' endless glamorous looks, taking picturesque vacations that will make you seriously jealous, posing adorably with her baby son, and looking all-around glamorous.

Despite all this, Craig certainly doesn't have the name recognition of a Kardashian (or a Jenner) just yet. But that doesn't mean she's a total nobody in Los Angeles. According to Page Six, she's cousins with comedian Kevin Hart's wife, Eniko Parrish, who even threw her a lavish baby shower in October of last year, according to People.

And, more specifically, she had an existing Kardashian connection even before her ex and the father of her child, Thompson, ever got together with Khloé Kardashian: She once dated Tyga. "What's the big deal? " you ask? If you haven't been keeping up with the Kardashians as closely as you should be. Well, here's your refresher: Kardashian's half-sister Kylie Jenner (who's also reportedly pregnant), is an ex of the rapper as well. What's more, Tyga has a son with Blac Chyna. You remember her from her messy breakup with Kardashian's brother, Rob Kardashian — and, oh yeah, those two have a baby together, too.

Did you get all that? Clearly, there are plenty of storylines to follow, if Craig does ever end up on the mix on future episodes of Keeping Up with the Kardashians.

How welcome Craig may or may not be into the KarJenner fold is another story, though. She and Thompson were already broken up by the time their son was born last December. Strikingly, Thompson's name was not listed on the boy's birth certificate, TMZ reported soon after he was born. Instead, the second space for parent was left blank.

It's not clear why Thompson's name was reportedly left off, but the same TMZ report states that Thompson wanted to be a part of his son's life, and that Kardashian was all for that. And that, in my opinion, means that Kardashian and Thompson's baby on the way is a very lucky kid. He or she will have an older brother very close in age, as well as a bunch of cousins (including Jenner's reported baby as well as Kim Kardashian's third child, who is on the way via surrogate). Something tells me that Kardashian, Craig, and the rest are going to be able to make this big family work just fine, and that they are going to look flawless while doing it.