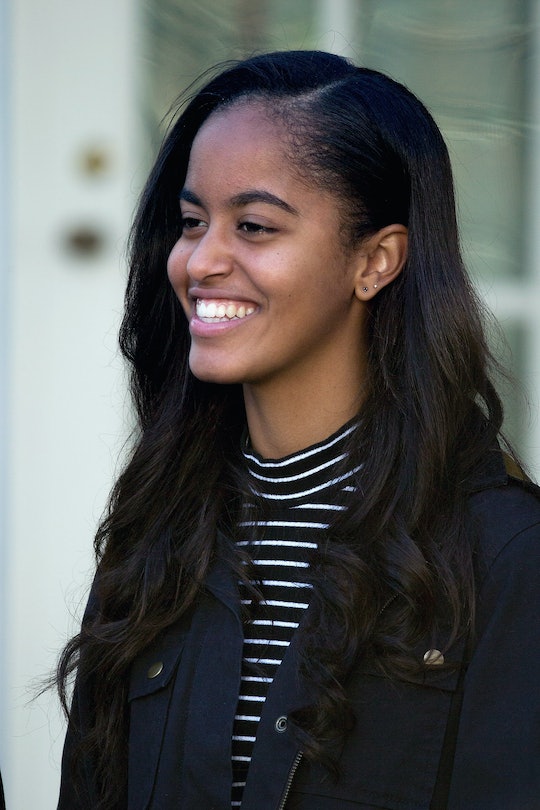 People Are Freaking Out About Malia Obama Smoking

Although her father is no longer the president, people are still freaking out over a video of Malia Obama smoking and pics of her kissing a boy while away at college. Ugh, can people just give this young woman some privacy? Because if she were not an Obama daughter and conservative media didn't need to continue to vilify everything the family does, this video of Malia is basically just a freshman at college doing freshman at college things. Nothing to see here, folks.

There are a couple shots of Malia circulating around social media. One is of her blowing smoke rings at an apparent party. The other is Malia kissing a guy, reportedly 19-year-old Rory Farquharson, the son of an investment banker from a British family with royal ties, according to the Daily Mail. All of this is happening at a tailgate party for the Harvard - Yale University football game last weekend, which is a famously raucous party for the Ivy League rivals. Simply, it was a pretty major weekend on campus and anyone who's been to college can likely relate.

What's sad is that people are spreading the images and videos around the internet, casting judgment on Malia, who again, is a 19-year-old freshman at Harvard University. Like, can the girl have a little fun? College is notoriously a time to experiment with things and date new people. There's nothing political or upsetting about Malia doing the same — she's an independent, smart, young woman. But there are unfortunately people out there who can't handle that.

Luckily, Others Came To Her Defense

Others Were Worried About Malia's "Friends"

Some other first daughters also came to her defense. Chelsea Clinton, for example, tweeted, "Malia Obama’s private life, as a young woman, a college student, a private citizen, should not be your clickbait. Be better." Ivanka Trump also scolded people for scrutinizing the young woman while she was away at college, or literally, ever, noting that she's a private citizen and deserves her privacy.

A lot of people on social media are also pointing out the "hypocrisy" of criticizing Malia, by noting that Donald Jr. had a reputation in college for "blacking out," according to the Los Angeles Times. Others are going even farther back and remembering that George W. Bush's daughters also partied a lot while their father was in office, but Twitter wasn't around to let everyone pounce on their reputations back then.

Jenna Bush Hager, in fact, told Us Weekly that she felt "fiercely protective" of the Obama sisters when they were criticized for their behavior at public events. While all of those accusations may or may not be true, the real issue with the criticism of the videos of Malia that get passed around, including one from last summer of her reportedly smoking marijuana at the Lollapalooza music festival, is that they shouldn't be newsworthy at all.

It's also sort of backwards to blame her choices in friends. Many of us have had friends who've betrayed us, so it's not Malia's fault for assuming that she could have fun or even Snapchat her life like 19-year-olds everywhere. Really, it's about politically biased news sites not giving those pictures and videos monetary value in the first place.

Ivanka and Chelsea, both moms with experience of political family life, are right: Just because a kid's parent decides to become a public servant doesn't mean that the kids have to suffer public scrutiny. Malia, much like 10-year-old Barron Trump, doesn't owe the media or the public anything. Just because you don't like their family's politics doesn't mean you can pick on them.

Also, people should really find something *actually* scandalous to worry about. According to a recent poll from the Harvard School of Public Health, one third of college students use tobacco products. Another 2017 poll from Yahoo News and Marist found that just over 52 percent of Americans over the age of 18 years old smoke marijuana. If Malia is smoking, she's not alone.

She's also not breaking any laws — recreational weed is legal in Washington D.C. and so is buying cigarettes, even if it's not the healthiest choice. And kissing one of her peers? Since when was a little college romance frowned upon?

Luckily, it seems like Malia is doing just fine. And she definitely has a strong support system in her mom, dad, and younger sister. Malia, if you're out there, keep doing you.