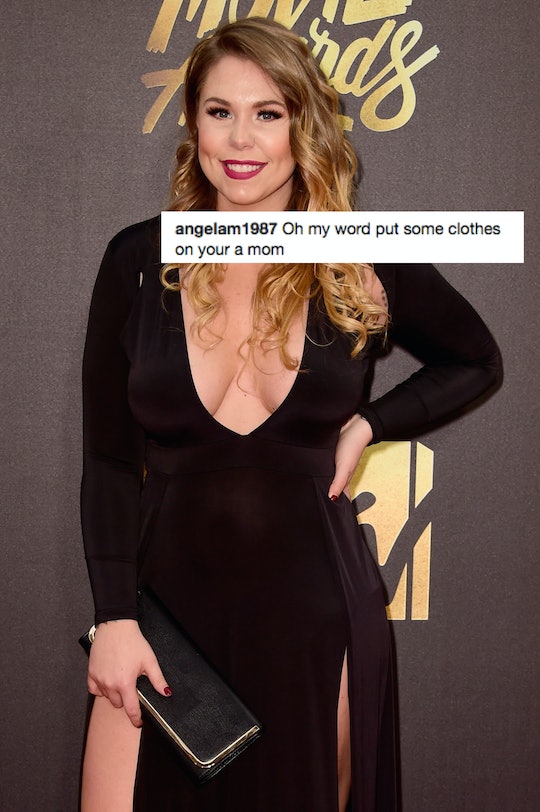 Mom Shamers Are Going After Kailyn Lowry For A Topless Photo, & It's So Wrong

Celebrity moms just can't do anything right, it seems. Innocent posts to social media are picked apart and analyzed by a nameless, faceless crowd. Case in point, people are mom-shaming Kailyn Lowry again, this time for showing too much skin while on vacation. Lowry has been the victim of such shaming many times, unfortunately, but she does have some of her fans on her side backing her up.

On a recent vacation to Jamaica, Lowry posted a shot of herself sitting on a bed, wrapped in a white sheet while naked from the waist up. She captioned the photo, "Jamaica had me feeling free," but many of her followers weren't content to let that freedom stand. They took to the comments section to shame her for not covering up in the photo.

Many were apparently worried about how Lowry's three sons would feel when they saw such a photo. "You seem so desperate so you really want any of your kids seeing these when they get older? They are going to get bullied by their friends so bad," one person wrote. "This is what's on your mind when your kids are present. You're a terrible mother," said another. "Why don’t u [sic] like having clothes on in your pics anymore," quipped yet another.

Others felt compelled to criticize her body, with one writing, "When are you gonna go to the gym? I don't think I've ever seen a picture of you in a gym." WTF. Another said, "Free with your Fake everything," referring to the plastic surgery that Lowry underwent in 2016.

Not all of the comments were negative, though. Many of her followers jumped to her defense. One pointed out just how far Lowry has come since her Teen Mom 2 days:

Let's talk about the good things... she graduated from DSU while taking care of two children. She balanced career, family, and soccer games. She is a business woman... she deserves applause.

Another called for support and empowerment, rather than judgement and criticism:

I don't understand why there is so much hate?? You look amazing, no one should say otherwise. Us women need to EMPOWER each other, not being each other down! You don't know what ones been through or is going through, so lay off the hate! #love#respect#peace

And one other fan really laid out just why Lowry shouldn't give the haters even two seconds of her time in the most brilliant comment ever:

You are beautiful! Being a Mother doesn’t mean your life is over and you can’t have your own life people. Women should build each other up, not tear one another down. Hope you got some much deserved relaxation and are rested up and ready for those 3 fabulous boys. Don’t listen to the haters! ✌️

Another photo from that same Jamaican vacation brought about a similar flood of harsh comments. Lowry posted another photo where she is wearing only a thong and is using a white towel to cover the front of her body. She captioned it "checking out the view." Rather than celebrate her confidence, many of Lowry's commenters honed in on her plastic surgery once again, claiming that she isn't really promoting self love.

Her hashtags on the post, specifically #bodypositivity and #lovetheskinyourein, drew criticism. "'Love the skin you're in' --- how can one use that hashtag when you've had so much work done on all your body? Butt, face, boobs, belly!" said one person. Another echoed the sentiments, saying, "Her butt her boobs her face it’s all fake. It’s easy to feel good when you’ve had your entire body worked on."

Lowry has described herself as "the most bullied Teen Mom star," and for good reason. Aside from her body, she has been shamed for her parenting style, for having mixed raced children, for her son's long hair, and even for getting a college degree (yes, really). All of that shaming adds up, and Lowry has admitted that it takes its toll. She spoke to Us Weekly about why she's a target, saying:

The comments and judgement have impacted her self-esteem and led her to question herself, she told the outlet, but she isn't giving up. Lowry is dedicated to living her best life and providing for her little family. Anyone who thinks otherwise, well... just save it.