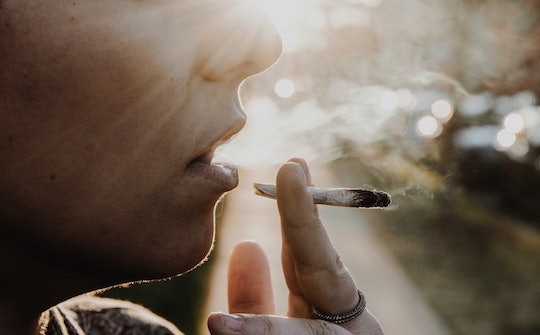 People Are Pissed At This Mom For Smoking Pot While Breastfeeding

A viral photo that began making its way around the internet recently, which featured a mom smoking pot while breastfeeding, has the public up in arms. Plenty of people are making it known that they're pissed. It's a sensitive issue, to be sure. All told, the uproar it's caused is pretty unsurprising.

The photo in question was posted by a Portland, Oregon, woman who was apparently a member of a Facebook group that supports cannabis use. Recreational use of marijuana is totally legal in Oregon, so the woman wasn't breaking any laws in using the substance itself. Still, people in the comments reportedly likened it to smoking a cigarette or drinking a beer while breastfeeding. Others just believed that the woman was putting the baby in danger by having marijuana smoke so close to the infant's face.

According to The Daily Mail, the woman allegedly wanted to show her friends a "beautiful" picture of herself taking a bong hit while nursing. Although the Facebook book was comprised of marijuana-smoking parents, it somehow made its way onto the greater web. The comments got so bad at that point that, according to Mothering, the woman removed her Facebook profile.

Studies show that breastfed babies may store THC in their brain for an extended period of time, especially since THC likes to hang out in fat, which is what comprises the majority of a baby's brain. Both the American Congress of Obstetricians and Gynecologists and the American Academy of Pediatrics recommend that women do not smoke marijuana while nursing.

Here's the thing, though. The ACOG and the AAP both wrote in their statements on marijuana that they don't recommend marijuana use for pregnant or breastfeeding women namely because there is a lack of sufficient data about the effects of weed on a baby's brain. Doctors believe that pregnant and breastfeeding moms should be discouraged from both smoking and consuming edibles, since both expose the child to THC, which is the chemical compound that makes people high.

If anything, the shaming of this Oregon mother was totally out of control. Since the research is mixed, and it's legal, she might not have been doing anything wrong. And some of the comments were downright gruesome.

In general, some debate is necessary: As more states make marijuana legal and people use it for a number of health and recreational purposes, more parents will have to decide whether to continue their marijuana usage if there are kids in the home or what to do if neighbors are regular users.

According to Vice, Thomas W. Hale — a scientist who's dedicated his career to eradicating the stigma around breastfeeding moms who take drugs like antidepressants — breastfeeding moms should not smoke weed. As he wrote on his website Medications and Mothers' Milk:

Studies in breastfeeding mothers have demonstrated that there is significant and documented risk to the infant based on human experience, or it is a medication that has a high risk of causing significant damage to an infant. The risk of using the drug in breastfeeding women clearly outweighs any possible benefit from breastfeeding.

Put simply, this isn't reefer madness. It's just that researchers like Hale believe it could hurt the infant's development. However, there are other researchers and women out there who believe the studies Hale is working from are out of date and that more work has to be done on the subject to form any widespread consensus on the topic.

For now, it's likely best that moms follow the ACOG and AAP guidelines. But that doesn't mean that moms who depend on marijuana are bad mothers or can't enjoy weed at all. If anything, a mom who smokes weed is arguably equal to a mom who enjoys a glass of wine at the end of the day. If a woman smokes weed, especially for a pain or mental health issue, she should talk to her doctor and explore her options. Because every mother should be able to make her own choices about what's best for her and her baby — just with a few safety precautions in mind.