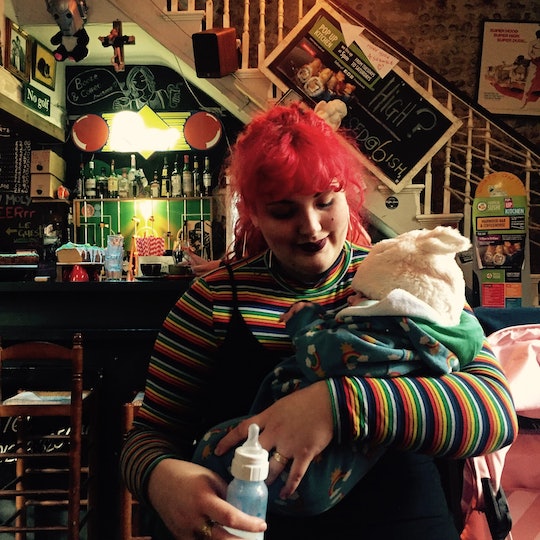 Yes, I'm A Mom Who Smokes Weed — But That Doesn't Make Me A Bad Parent

The first time I can remember learning about recreational drugs from an adult was in middle school. "All drugs are bad, kids," our health teacher said. "So don't take them unless you want to get addicted and die." It was a very Mean Girls kind of moment.

Looking back, this lesson was obviously absurd, but I believed it anyway. Ten years or so later, I found myself in college and struggling with severe social anxiety and insomnia. My older sister recommended I try some good old-fashioned cannabis, and I never really looked back.

When I found out I was pregnant, however, I wondered if my relationship to weed would change, or if it even should. Parents who use drugs are regularly deemed "bad," "irresponsible," and "selfish," regardless of what kind of drugs they use. Some parents who smoke marijuana have even had their kids taken away from them as a result of their cannabis habit, even in places where it's legal to smoke.

But it didn't take me long to realize that nothing could be more selfish to my daughter than sacrificing the person I am outside of motherhood. And that person has a relationship with cannabis.

In all honesty, weed has been far more helpful to me than any prescribed anti-depressant or fancy-ass cocktail. It's calmed my nerves before parties. It's soothed the late-night pains of irritable bowel syndrome. It's helped me sleep when I'm in the throes of insomnia. It's heightened my sex drive. And it's far preferable to alcohol in terms of how it makes my body feel, both in the moment and the morning after.

This is true for many folks, I'm sure, which is likely part of the reason why marijuana is now legal for recreational use in seven states and utilized for medicinal purposes in even more (including New Jersey and New York, where I lived until recently moving overseas). It's why Bob Marley famously believed that “herb is the healing of a nation, alcohol is the destruction.” All I can say is that marijuana has never made me vomit for hours on end, pick a fight with a stranger, insult a loved one, or wish I were dead. Booze certainly has.

Honestly, weed has been far more helpful to me than any prescribed anti-depressant or fancy-ass cocktail.

Since having my baby, I haven't burned the herb nearly as much as I once did. I don't need to smoke weed before going to bed, because the exhaustion of early parenthood means I can fall asleep whenever the opportunity presents itself. I don't use it to relieve my social anxiety, because I don't go out often enough, and I wouldn't smoke if I knew I had to be on baby watch. But yes, I have smoked weed since giving birth, mostly on special occasions: a night out in the city with friends, for example, or a party on New Year's Eve.

When my kid is older, more independent, and more regularly out of the house, I may want to smoke weed more often. I fully intend on being open and honest with her about my use of recreational drugs once she's old enough, though. I won't lie about what I have or haven't experimented with. I won't blanket every illegal substance under an umbrella of "all drugs are bad." Instead, I hope to highlight the differences between addictive and non-addictive drugs; between something like weed, which has not been proven to be physically addictive, and heroin, which has. I'll try to make sure she knows that I'd never fault her for trying a spliff. I might even light up when I am certain that she's sleeping through the night. Hell, maybe I'll even smoke with her when she's a young woman, too.

That said, I'd be lying if I said that the times I've smoked haven't come with inner turmoil. Regardless of the fact that my daughter was always being cared for by one of her grandparents or her father, and that her safety was never a concern, I briefly wondered whether smoking weed made me a "bad" mom. "Surely, I should be at home with her," I thought. "I shouldn't be indulging in such pleasures anymore. I shouldn't be altering my state of consciousness in any way. I should just be happy to stay grounded in my current reality," especially since that reality allows me to get to know a smiley, lovely, tiny human.

It's OK to need time to myself; time away from my baby. It's OK to be a person who inhales.

But the thing is, it's unfair to expect my baby to satisfy every aspect of my life and my identity. That is far too much pressure to put onto any one human, so I refuse to pretend that she checks every box for "things I need to keep my existence happy and interesting." She is undoubtedly the most important person in my life, but she is not my entire life.

It's also OK for me to admit I need some me time. It's OK to admit that I'm only 26 years old, and that before I found out I was expecting, I was fully intending to spend many of my evenings in a slightly inebriated state. It's OK to be a mom and still want to dance until sunrise sometimes, or to hit up the rave tent at a music festival. It's OK to want to smoke a joint and think all manner of existential thoughts over a re-watch of It's Such A Beautiful Day. It's OK to need time to myself; time away from my baby. It's OK to be a person who inhales.

The thing about that middle school drug lesson I once got is that it operated under the assumption that anyone who takes illegal substances is selfish. They cannot possibly be responsible, fully functioning members of the universe with families, jobs, children, interests outside of their drug use, or remotely steady lives.

In reality, I've known far more people in my own life who use recreational drugs at no expense for their health or the wellbeing of others than those who have used them in addictive, harmful ways. This is especially true when it comes to weed, a drug that pediatrician and public health administrator Joycelyn Elders once said is "less toxic than many of the drugs that physicians prescribe every day."

Weed hasn't made me a bad parent, but it has made me a more thoughtful, introspective, creative, and empathetic person.

From my experiences, marijuana has definitely been a blessing at times. It's allowed me to think more deeply about subjects like art and science and my own writing, while simultaneously helping me become more lighthearted. It has given me some beautiful nights with family and friends. It has helped me become more comfortable in my own skin, introducing me to my own body in ways I never quite achieved (or allowed myself to achieve) when perfectly sober. It's brought me closer to people I never imagined I'd have much in common with at all, breaking down the barriers that we as humans so often create.

I have learned a lot of lessons with the help of Mary Jane, lessons far more impactful and life-changing than anything I picked up in health class. Weed hasn't made me a bad parent, but it has made me a more thoughtful, introspective, creative, and empathetic person. And the truth is, those characteristics are at the heart of the lessons I hope to pass onto my kid.