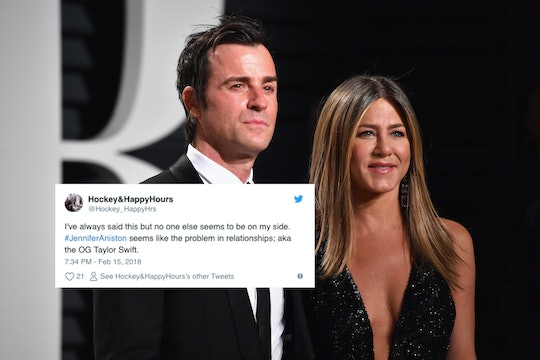 Jennifer Aniston might be a gorgeous, smart, talented, A-list star who is no doubt living her very best life — and who, at 49 years old, somehow seems to be completely immune to the aging process. Yet, while she may be eternally-beloved in all our Friends-worshipping hearts, Aniston just cannot seem to catch a break when it comes to public criticism of her personal life. On Thursday, she and actor Justin Theroux announced they were separating after two years of marriage, and though the news came as a pretty big shock, now people are saying Jennifer Aniston "can't keep a man," and honestly, it's straight-up infuriating.

Aniston and Theroux tied the knot in a surprise August 2015 ceremony, three years after Theroux proposed to Aniston on his on his 41st birthday according to ABC News. But given that the world had seemingly never quite gotten over her split from Brad Pitt literally a decade earlier, her marriage to Theroux seemed to finally alleviate the public's desire to see Aniston live happily ever after, rom-com style. Naturally, it didn't take long before the focus shifted to the Great Aniston Bump Watch (something she specifically had to come out and tell people to stop discussing), and, for a while there, it seemed like maybe, finally, fans had accepted the fact that Aniston might just have a right to live her life on her own terms. Until, that is, they learned that she and Theroux had actually called it quits at the end of last year.

Feeling actual, legitimate sadness over the breakup of a high-profile celebrity couple is certainly nothing new — I'm personally still not sure that I've recovered from my heartbreak over Chris Pratt and Anna Faris' breakup in August, and if John Legend and Chrissy Teigen ever split, I might just be officially done with love. But even though we know basically nothing at all about why Aniston and Theroux called it quits (distance is rumored to be a factor, according to Us Weekly, but it's almost definitely more complex than that), the social media response pretty much immediately assumed that the split was somehow proof that Aniston is doomed when it comes to love.

Then again, that's not exactly surprising: when the world learned that Pitt and his now-estranged wife Angelina Jolie were an item a few months after his split from Aniston, the public perception was that somehow, it was all Aniston's fault. Tabloid rumors swirled that she must not have wanted to have children, and that it was that inherent "selfishness" that had inevitably driven poor Pitt into the loving arms of someone seemingly much more naturally maternal and fertile. After all, not only was Jolie already a single mother to two adopted children, but as someone who was both a successful, beautiful, movie star, as well as an outspoken United Nations ambassador and advocate for human rights, at the time, Jolie definitely seemed to be the ultimate example of a woman who "had it all."

Aniston openly denounced those rumors though, and in 2005, she told Vanity Fair that it wasn't just untrue to say she didn't want to have a baby, it was also incredibly offensive and sexist. She said,

A man divorcing would never be accused of choosing career over children. That really pissed me off. I’ve never in my life said I didn’t want to have children. I did and I do and I will! The women that inspire me are the ones who have careers and children; why would I want to limit myself? I’ve always wanted to have children, and I would never give up that experience for a career. I want to have it all.

But while Pitt and Jolie went on to become the ultimate procreating "it" couple until their own surprise split nearly a decade later, Aniston's relatively-short-lived, high-profile relationships with Vince Vaughan and John Mayer earned her a reputation for being unlucky in love (naturally, it couldn't possibly have anything to do with the men she was dating).

Years later, in a 2014 interview with Harper's Bazaar, Aniston once again shared her frustration with the public's unending preoccupation with her relationship status, and said,

How many times can I be out there in the world, enjoying my life, and yet the narrative is 'Poor, Sorry, Sad in Love Jen'…whatever the stupid headline is.

By the time of that interview though, Aniston was already engaged to Theroux, and the fact that that detail seemed to ease the world's anxiety that she might one day presumably die loveless and alone was not even sort of lost on her. When asked about it, Aniston responded, "Oh, thank God. Am I finally all right?" (I mean, you can pretty much hear the eye roll embedded in that statement.)

Unfortunately, not a lot seems to have changed in the way the public views Aniston though — or, really, any unmarried, child-free woman, particularly if they're over the age of, what, 25? — because in the wake of the split, the bulk of Twitter reactions seemed to either be lamenting the fact that Aniston is single once again (heavy sigh), or speculating that, somehow, this is all a sign that she and Pitt should reconcile (with little to no thought given to whether she would even want that, even though I can't imagine many people actually have a desire to reconcile with their former spouses after a 10-year separation).

As much as it might be a much more boring explanation than the possibility that poor Aniston has secretly carried a flame for Pitt this entire time — and, as a result, that she couldn't possibly make it work with any other man — it seems much more likely that Aniston and Theroux just came to the decision that they didn't want to be together, like many married couples do. And since they both have full lives and plenty of money and no dependent children who would be affected by a split, there really isn't any reason why they shouldn't have called it quits if that's what they felt was best.

The truth though, is that whether Aniston goes on to marry again and ride off into the sunset, or whether she opts to take a string of younger lovers, or whether she perhaps just goes on to live her life — gloriously and independently solo in her ridiculously beautiful California home with her fabulous female friends, working on fulfilling projects and taking luxurious, kid-free vacations without ever having to consider the needs or wants of a man — it almost certainly won't make any difference. Because while the internet might continue to feel the need to be concerned on Aniston's behalf, something tells me she's probably doing just fine — and that contrary to popular belief, her ability to "keep a man" is probably the very last thing on her mind.