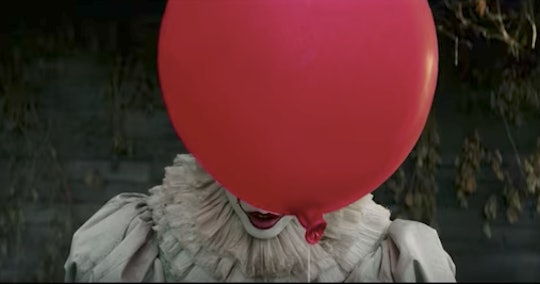 People Are Tying Red Balloons To Sewers For 'It' & No, No, No, No

There are certain images that are so evocative, so singular, they stay with you forever. A shark fin cutting through calm waters (Jaws, plus every nightmare I've ever had). A sword in a stone, a la the legend of King Arthur. And of course, a red balloon floating ominously close to a sewer drain. Because "we all float down here, Georgie." You know what I'm talking about, of course. The scary clown to end all scary clowns; Pennywise from the movie It. In the days before the It remake hits theaters, people are tying red balloons to sewers in what appeared to be a prank, and police (and, you know, normal people who aren't sociopaths) are not into it.

Apparently, the police department in Lititz, Pennsylvania, has been besieged with an alarming number of red balloons tied to sewer grates, presumably as an homage to Stephen King's classic novel It. For the uninitiated, a young boy is lured by the promise of a red balloon after he loses his paper sailboat down a sewer grate. The culprit, Pennywise the Clown, is the murderous clown who can only be described as someone you never, ever want to encounter in a sewer. The red balloon sightings have put the Lititz Police Department in an odd position of having to calm local residents after some have lost their marbles over seeing red balloons.

On Tuesday, the Lititz Police Department shared the news on its Facebook page that red balloons (at least 20, according to USA Today), were tied to sewer grates in the area... and the police were "terrified" when they had to release them.

A certain movie is coming to theaters in two days, and a local prankster took it upon themselves to promote the movie...............we give points for creativity, however we want the local prankster to know that we were completely terrified as we removed these balloons from the grates and we respectfully request they do not do that again. If you're not sure what we're talking about, search "It" and watch the preview, but we suggest watching the preview with a friend or coworker with all the lights on and the sound down low. "You'll float too."

As it turns out, the red balloons dangling at the edge of a sewer were all part of an elaborate (and brilliant) campaign to promote the movie. The red balloons have shown up tied to sewers all over the country, including Raleigh, North Carolina, and even outside Stephen King's home in Bangor, Maine.

The red balloons have even made their way to Sydney, Australia, to freak out local residents.

This stunt with the red balloons is relatively mild compared to the rash of creepy clown sightings that dominated the news last fall. Across the country, people reported mysterious sightings of nefarious clowns for no apparent reason. It got so bad that poor Ronald McDonald, erstwhile mascot for McDonald's, was temporarily let go to avoid upsetting people. Then sightings stopped suddenly. That's not scary or anything.

Maybe once the It remake is released in theaters on Thursday, things will get better. Right?