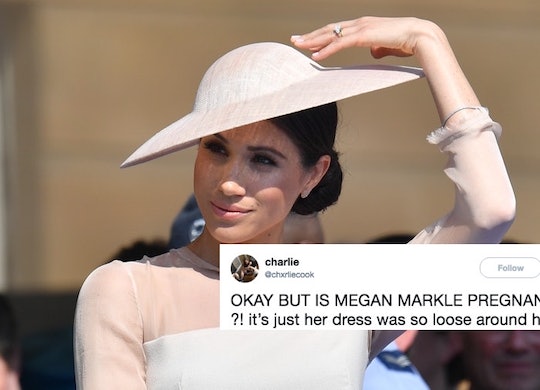 Prince Harry and Meghan Markle's wedding had everyone talking over the weekend. And a lot of it had to do with her gorgeous Givenchy wedding dress. She was absolutely stunning. Well, some people thought so. On social media, there are a ton of people assuming Meghan Markle is pregnant because of the cut of her dress and one that she wore on Tuesday for her first official royal appearance. Cue to the groans, please, because this is ridiculous. Can we just let her wear what she wants in peace?

Of course not. Speculation about the state of Markle's uterus was happening during the wedding. Yup, as she was walking down the aisle, television commentators and people on social media wondering out loud how long the world would have to wait for a royal baby. It's so sexist, and a shame that some people are just obsessed with a woman as an incubator for fetuses and nothing else. No matter how accomplished she is or what she actually wants to do with her life.

People really believe that the lack of fitted waist on both her wedding gown and her Stella McCartney reception dress was so that Markle could "hide" a bump. Others assumed that the smiles she and Prince Harry exchanged every time family and love was brought up meant that they were already expecting a child. Because, you know, it couldn't be that the reverend talking about sex in church made them blush. Here's the thing though, even if she is pregnant, it's no one's business.

Yet, The Speculation Is Rampant

So, it's already offensive that people need Markle to be pregnant so quickly, as if that was her only purpose. But to say that her dress was "ill fitted" or was "too loose" is next level. Let's just walk through this nice and slow for the haters out there.

We'll start with the complaints that her dress "didn't fit." Her dress was definitely not "ill fitted." The Stella McCartney party dress was slinky and comfortable looking. Her Givenchy gown was iconic and could be worn in literally any decade, past, present, or future. Like, head's up, Givenchy doesn't not know how to tailor something. The dresses were perfect and likely exactly what Markle wanted. You don't get married in front of the entire world in something you just feel "meh" about.

Also, how much tighter around the waist does a dress have to be? She wasn't swimming in either dress, though maybe it was the three-quarter length arm that threw some people's perceptions off? That a woman has to have her body squeezed into a dress so that men can gawk at her hips and tummy or she's uncomfortable on the most important day of her life should be unacceptable thinking. Yes, the dresses are not super tight — she had some wiggle room, which was a practical and fashionable choice. Peep a Vogue magazine sometime, people.

For Real, Tell Me How These Are "Loose"

Let's also remember that Markle has a tiny frame. If any of those dresses were any tighter, people would likely be body-shaming her for a whole other reason. They've already come for her legs for being "too skinny." There's no way Markle could win with the peanut gallery, but she has no obligation to wear clothes that objectify her body for home viewers or explain herself.

Many people expect that Markle and Prince Harry will have children eventually, but they haven't talked about it publicly. Centuries ago, marrying into the royal family meant taking on the "duty" of having children. Luckily, it's not the 18th century anymore, but people still think that Markle will get pregnant quickly, as The Mirror reported.

But she might not. It's not known for sure what she and Prince Harry want when it comes to kids, which is a very personal matter. One thing is for sure though: Markle's clothes always fit her beautifully and she's definitely a style icon. No one should have to wear too tight clothes or have people whispering about their uterus, especially on their wedding day. Let the duchess live in her "loose" dresses.