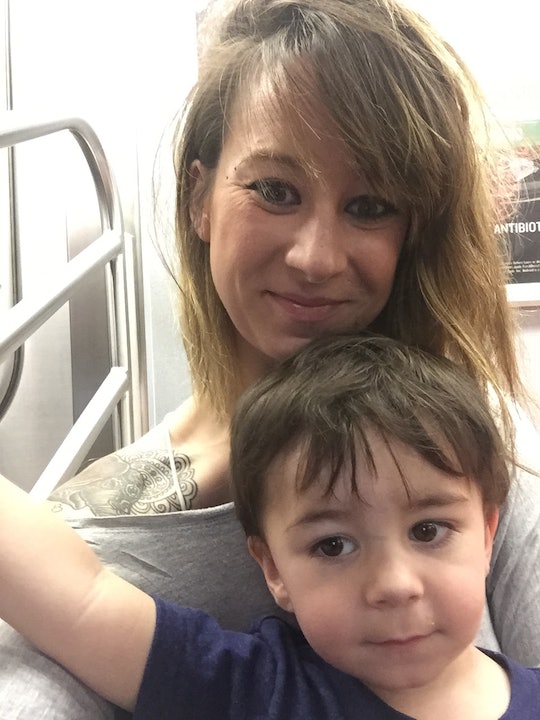 People Call Me A "Bad Mom" & Honestly, I Agree

I'm sitting on my living room floor, haphazardly putting my son's toys into an empty box, packing up the first home he's ever known. It's the place where my water broke, where he took his first steps, where we had our first slow dance. We're leaving home to move across the country, to New York City, for a job opportunity I've worked my entire life for. I look over at my son and smile, only to feel an unforgiving flush of fear, dread, and guilt. When I announced our family's cross-country move, so many people called me a bad mom for following a career to a large city with a child in tow. Even though some were supportive and excited, people commented asking me how I could place such a high priority on my career and not my child. How could I bring my son to such a bolstering, loud, intrusive city with millions of people, endless concrete, and an unforgiving metro system? Why didn't I care more about being his mother? Why wasn't I satisfied with simply being his parent?

It's hard to assess every single decision I make as a mom, a friend, a lover, and an employee and weigh the potential influence they may or may not have on my child. It's hard to balance what I think is best for him with what I know is best for me. It's hard to feel completely confident in every single choice I make, because the stakes are high and his happiness matters but, damn it, so does mine. But after careful consideration, I realized that the best thing for my son was for me to be the "bad mom" so many people believe me to be. Because you know what? Maybe I am exactly that: a bad mom.

If taking the opportunity to unapologetically say, "I matter. What I want and need matter. My happiness matters," makes me a bad mother, then I sincerely hope I am never a "good" one.

If exposing my son to a new city that's as diverse as it is exciting makes me a "bad mom," then a bad mom I will proudly be. Thanks to this cross-country move, my little boy is now exposed to so many different people from varying backgrounds. He sees people of all colors and classes and religious faiths existing together. He gets to experience different places, go on "adventures," and learn things that will only enrich his future. He won't see differences as "weird" or "odd" or "off-putting," because he'll know they're nothing more than the fabric of our culture. He won't remember our move, but he'll always remember New York City. He won't remember a long plane ride or boxes or his parents sleeping on an air mattress until they could adequately set up their new home, but he'll never forget building a life around people of different genders and ethnicities.

If refusing to sacrifice every single aspect of my life and my own goals somehow makes me a "bad mom," I'm happy to carry that title. I refuse to continuously give of myself to the point of depletion, repurposing my very existence so that it centers completely around my child. I cannot downplay my humanity to the point that I am nothing more than someone's "mom," void of any individuality. I refuse to ignore every other aspect of my person — to forget about the very things that make me, me. Most importantly, I won't make my son responsible for my happiness by keeping myself from having a rich, fulfilling life outside of him. When he goes into the world, I don't want him to feel guilty for "leaving his mother." I want him to feel confident in his abilities and excited for the future, knowing that his mom will be happy without him and he, in turn, will be happy without her. I also want those same things for myself.

Some may think moving my son across the country qualifies as "bad parenting," but I'm teaching my son that if you work hard, never give up, and appreciate the help, passion, and brilliance of others, you can do something you love. Every single day, my son witnesses my happiness and fulfillment. I have the opportunity to show him that a woman's worth is not defined solely by her reproductive choices, and that being a mom isn't the only thing that makes a woman "complete." My son has the privilege of seeing his mom work, and enjoy that work. And as his parent, that is incredibly important to me.

If taking the opportunity to unapologetically say, "I matter. What I want and need matter. My happiness matters," makes me a bad mother, then I sincerely hope I am never a "good" one. Of course, this isn't always easy. I'm still battling that unforgiving flush of fear, dread, and guilt any time I assert my right and need to feel validated and fulfilled in areas outside of motherhood. Moving across the country hasn't shielded me from the influx of condescending questions, the ones that question my ability as a mother and ask whether or not I love my son "enough" because we packed up and moved east for the betterment of my career.

I've made plenty of mistakes that have made me feel like a "bad mom," but never have I felt like a bad mother for unapologetically caring for and valuing myself.

I'm working towards burying the idea that caring about myself, my dreams, my goals, and my career automatically means that I don't care about my son's, because his existence does not mean mine no longer matters.

I know I'll fail as a mother, because part of motherhood is failing at the very thing you strive to be effortlessly great at. In fact, I've already failed. Countless times. Last week, I failed to put enough sunscreen on my son and his nose was sunburnt when we left the beach. When he was 6 months old, I failed to watch him carefully enough and he fell off of a counter, from a height that warranted a trip to the emergency room. I've failed to keep my composure and patience during one of his many temper tantrums, and yelled when I should have been calm. I've made plenty of mistakes that have made me feel like a "bad mom," but never have I felt like a bad mother for unapologetically caring for and valuing myself. I've never felt like a bad mom for putting myself first, especially when I decided it was necessary and warranted. I've never felt like a bad mom for going to work and allowing someone else to care for my son. I've never felt like a bad mom for sacrificing bedtime or bath time with my son in favor of working late or picking up an extra shift or going to a movie, because I know I'm building a future where we'll have, and enjoy, many, many more moments like that together.

I know I won't always win. And even though I think I'm doing what's absolutely best for myself and my son and for my partner, I know there will always be people telling me otherwise. So go on, call me a bad mom, because I'm finally OK with that.