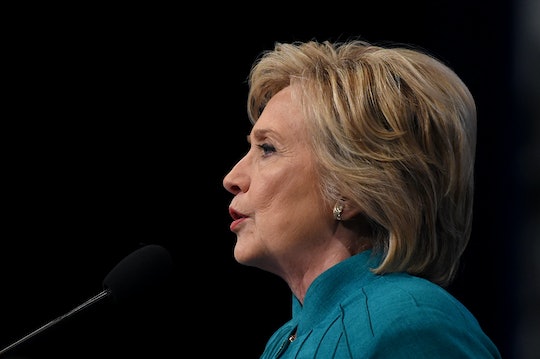 It's day three of the Republication National Convention, and that means it's time to "Make America First Again" for party leaders and Donald Trump supporters. But it's not the first time that the crowd in Cleveland is chanting "lock her up" at a speaker's mention of Hillary Clinton, as they did when conservative radio host Laura Ingraham accused the presumptive Democratic nominee of feeling she was above the rule of law. Calling for the imprisonment of a presumptive presidential nominee is another bizarro aspect of this presidential election, and people chanting "lock her up" at the Republican Convention need to just stop, for everyone's sanity.

The odious chant first began to proliferate on the first night of the convention, and gained force and strength when New Jersey Gov. Chris Christie framed his speech as a trial for Clinton, whom many believe should have face criminal charges for using a private email server to conduct business as Secretary of State. Christie also brought up a series of other perceived failures of the Clinton and Obama administration — like the controversial Iran nuclear deal — asking the crowd each time, "Is she guilty or not guilty?"

Each time, of course, the crowd shouting that she was guilty, and loudly called for her to be jailed. Christie was just one of many prominent Republicans inciting the "lock her up" chants throughout the convention so far. Texas Sen. Ted Cruz did it while on the presidential campaign trail, and it the propensity for elected officials to do this leached into day three of the convention as well, when Pam Bondi, Attorney General of Florida, interrupted her own speech to respond to the crowd: "Lock her up," she said. "I love that."

Because we live in a democracy, it's absurd to that elected officials would call for other elected officials to be jailed without due process. It's on par with the birther movement that alleged that President Obama was not a United States citizen when he was running for president in 2008 — a claim that, funnily enough, Donald Trump perpetuated. And for the crowd at the RNC to chant "lock her up" at nearly every mention of Clinton displays an unwillingness to analyze the real issues at hand, and, importantly what it is that their chosen candidate actually would do for this country if he actually made it to the Oval Office.

But the chant seems to be the manifestation of the driving force behind Donald Trump's all-around reckless campaign. For a man who wants to force Mexico to pay for a wall built along its border with the United States and who can't talk in any specific terms about how to combat ISIS, the notion must seem perfectly plausible.