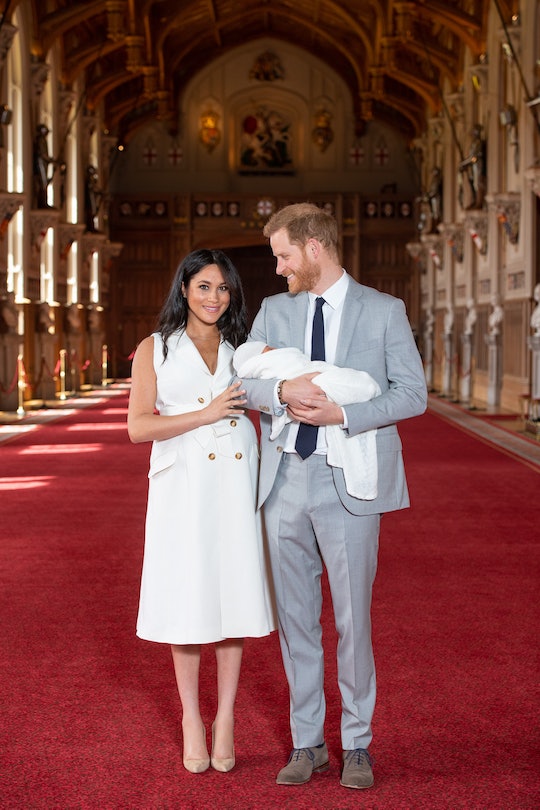 If you're feeling pretty great about feminism today, thinking we've come so far as women and we're starting to really get this whole gender equality thing, do yourself a favor: Don't Google Kate Middleton and Meghan Markle's names together. Especially not now, mere hours after the beaming Duchess of Sussex and her giddy husband enjoyed their first official interview and photo call with their little baby. Despite a whole slew of well wishes and kindness, there remains an insidious need to compare women. And honestly everyone, comparing Meghan Markle and Kate Middleton's postpartum bodies simply cannot be a thing in 2019. It should never have been a thing, but at this point I'm almost certain we are meant to know better than this.

Meghan Markle has now given birth to her first child, a son named Archie Harrison Mountbatten-Windsor, with husband Prince Harry. The couple welcomed little Archie on May 6, and on Wednesday they met with reporters and photographers at Windsor Castle for their first official photo call introducing him to the world.

So here was what was immediately evident to me: Prince Harry looked like his head might explode if his grin got any wider. Meghan Markle looked serene and excited all at the same time. Baby Archie was hard to see in his father's arms, but I am pretty sure I caught a glimpse of chubby cheeks and aren't those just the best? I mean, look at that little nose...

Unfortunately there were far too many people out there looking for something else. Looking to compare Markle's postpartum body with that of her sister-in-law Kate Middleton.

Several media outlets also shared articles comparing the Duchess of Sussex and the Duchess of Cambridge's postpartum appearances, focusing on their outfits but also on their post-birth "looks." While not overtly calling out either of their bodies necessarily, the message is clear: these two women have been thrown into a competition neither of them chose and everything about them will be assessed, even in those tender hours after giving birth.

Of course, social media users aren't required to be as subtle. It seems there are two camps, either Team Kate or Team Meghan, and they have decided it is impossible to be supportive of both women and their postpartum bodies.

Meghan Markle's postpartum body doesn't need to be a statement any more than Kate Middleton's was after she gave birth. Their bodies are simply their own and have nothing to do with one another.

The reality is, it's hard enough to walk out in front of dozens of photographers after giving birth. Your body is tired and sore and feels rather foreign to you. The last thing any woman needs is to be compared to anyone else, favorably or otherwise.

It turns out you can actually like and admire both Meghan Markle and Kate Middleton at the same time, folks. We need to stop this either/or thing we do with women at some point and I don't know about you but I'm ready for this to be that point right now, OK?