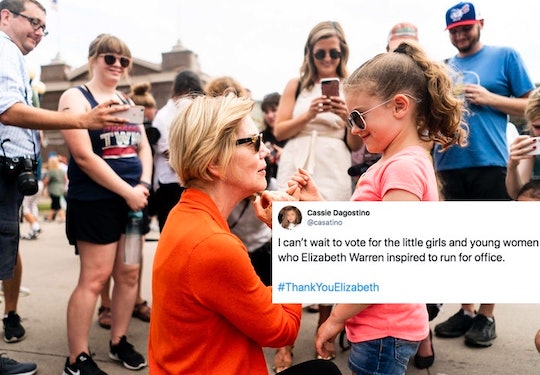 Just moments after news broke on Thursday that Massachusetts Sen. Elizabeth Warren ended her presidential bid, fellow politicians, activists, and more took to Twitter to thank her for her thoughtful and compassionate work.

"Today, I’m suspending our campaign for president," Warren said in a call with her campaign staff, a transcript of which was later published on Medium. Warren's decision to leave the presidential race came on the heels of surprisingly bad Super Tuesday results that left Sen. Bernie Sanders and former Vice President Joe Biden as the two clear frontrunners. The results of the election, which left Warren a distant third even in her own state of Massachusetts, came as a shock to many considering how powerful her campaign had been for many leading up to it.

"I know that when we set out, this was not what you ever wanted to hear. It is not the call I ever wanted to make. But I refuse to let disappointment blind me — or you — to what we’ve accomplished," she told staffers.

Although her presidential bid has come to an end, Warren said on the call that she believed her campaign had made a "lasting difference."

"We didn’t reach our goal, but what we have done together — what you have done — has made a lasting difference," she said. "It’s not the scale of the difference we wanted to make, but it matters — and the changes will have ripples for years to come."

Shortly after this news broke, #ThankYouElizabeth started trending on Twitter and people from all over the country took to social media to share the very specific ways they felt grateful to the former teacher from Boston.

Fellow politicians like former Democratic presidential candidate Andrew Yang, who previously tweeted that she "deserves to be doing better" in the polls, took a moment to credit her with being someone who will always work hard for the people.

"Elizabeth Warren is an amazing leader," he wrote. "Always gracious, warm, brilliant and genuine. Everyone knows you were in the race to make things better for everyday people. You will continue to fight because it is who you are."

Rep. Ilhan Omar also took a moment to reflect on Warren's work as part of the progressive movement. "Let’s not undersell the power of Elizabeth Warren’s candidacy," she wrote. "She set the pace for policy on everything from disability justice to racial justice to a wealth tax. She is a giant of our movement. I can't wait for our progressive movement to build together."

The Twitter account for the Women's March also shared a tweet thanking Warren for "kicking that door open and showing the world that a woman can and will be president."

"Elizabeth Warren ran a dynamic, hopeful campaign centered around smart policy solutions to make this country work for everyone," she wrote. "I know this is just the beginning for her, her team, and the millions of women and girls she inspired with her run."

One woman shared a clip of Warren sharing a pinky promises with a little girls, something she's been doing for years, reminding them that they can run for president "because that's what girls do."

"I can’t wait to vote for the little girls and young women who Elizabeth Warren inspired to run for office," Twitter user @casatino wrote.

"She ran for president because that's what girls do," gun violence prevention activist Jaclyn Corin tweeted. "#ThankYouElizabeth for everything you've done & everything you will do. You've inspired me and so many other young girls around the country to fight for what's right with love and dignity."

Perhaps one of the most talked-about moments from Warren's campaign was her 60-second take down of former New York Mayor Mike Bloomberg, a billionaire who reportedly spent $500 million of his own money in his bid to take the presidency, according to Forbes, and has also since pulled out. Last month, during a debate, Warren called out Bloomberg for allegedly calling "women 'fat broads' and 'horse-faced lesbians.'"

Writer and activist Charlotte Clymer tweeted that Warren "had the guts to hold [Bloomberg] accountable in primetime."

Actor Adam Best noted that it wasn't just Bloomberg Warren called out, but also former Democratic candidate and moderate John Delaney. During a debate in July, Warren told Delaney she didn't understand why anyone "would go through all the trouble of running for President of the United States just to talk about what we really can't do and shouldn't fight for."

Warren's presidential campaign might be over, but her influence certainly lives on. As Warren told her staffers, "Our work continues, the fight goes on, and big dreams never die."