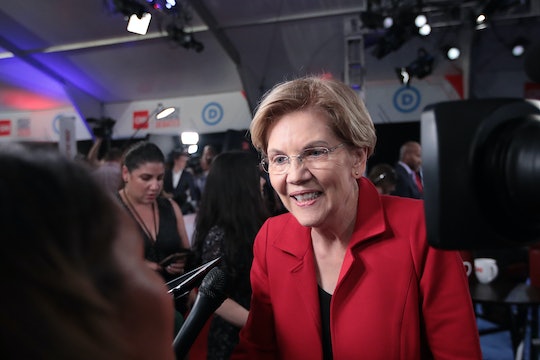 Massachusetts Sen. Elizabeth Warren is campaigning to become the Democratic presidential nominee for the 2020 election. We all know this, of course. Warren is one of a record number of women who have thrown their hat in to the presidential race for 2020 against President Donald Trump, which is a pretty great trend if you ask me. And it's also a pretty great trend if you ask her. Because she doesn't just have her eye on this prize, she has her eye on all of the prizes for generations to come. Elizabeth Warren's "pinky promise" tradition with little girls is a gift to the next generation, because it is giving all of those children hope for their future.

Ever since Sen. Warren announced back in February that she would be running for president against President Trump in the next election, as per Vox, she has been carrying on a precious little ceremony. It seems that whenever she meets a little girl, she crouches down to have a moment with them that I like to believe will resonate for years to come. She says to them, "I'm running for president because that's what girls do." And then they share a pinky promise so they will always remember. And if this isn't the most beautiful thing you see today, I don't know what to say to you.

This tradition actually goes back to long before Warren became a presidential candidate. As she wrote in an essay in March for Medium in honor of Women's History Month, she began sharing a pinky promise with little girls back in 2012 when she was first running for Senate. Now that she's running for president alongside so many other strong women, she believes the message is more important then ever. As she explained in her essay:

I want every little girl to grow up knowing that they can fight from the heart — and they can win. This Women’s History Month, there are more women than ever before in Congress and more women than ever running for president and showing little girls everywhere that their dreams are possible. So today, and every day, I’m celebrating every woman who wakes up ready to fight to make life better for all the girls who’ll come after us.

There are plenty of critics who will see this as some sort of political gimmick of course. I get it, I guess. I think we've all become more jaded after the last election. Less likely to trust any politician even if that particular politician has a history of going into heated battle against big corporations and banks like Wells Fargo in defense of the working class.

But there is also this: You are a little girl who gets dragged to a political convention because your parents want you to be more aware. You meet this woman who is the center of everything at that moment. She is full of passion and spark and hope. And she bends down to tell you that she's running for president because "that's what girls do." You share a pinky promise. You take that promise with you everywhere.

I don't care if this is a political gimmick. And neither do any of those little girls.