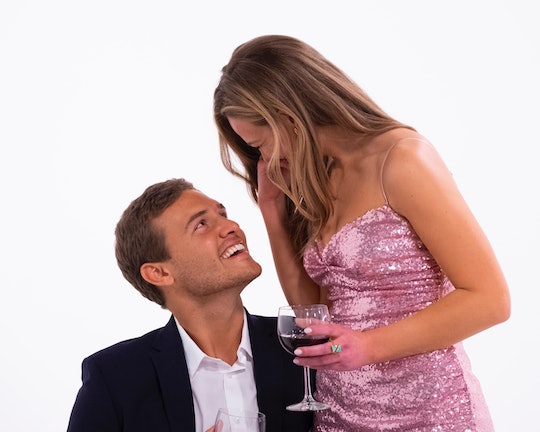 Twitter Loves Peter's Parents' Reaction To The Windmill On 'The Bachelorette'

Before The Bachelorette finale special, Peter's parents had probably already heard all about his fantasy suite date with Hannah in the windmill. But nothing compared to hearing Hannah announce on-stage that they had sex not twice, but four times on their date. As a result, there are already tons of memes about Peter's parents from The Bachelorette, proving that his parents aren't like regular parents — they're cool parents.

Not many parents would openly applaud the announcement that their son had sex on TV multiple times in one night, but Peter's parents looked like they wanted to give him a few high fives of their own after he high-fived Hannah. I would probably be mortified to learn about my adult son's sex life along with the rest of the country, but Peter's parents are basically a national treasure after their reaction to Peter having sex four times in a windmill.

They were in the audience on The Bachelorette finale special to provide moral support to Peter, who was *this* close to being one of Hannah's final two men. No parent wants to see their child heartbroken, so it was a show of support for Peter to have them there to have his back. I don't think anyone could have predicted that they would be as supportive as they were about every aspect of his journey this season, but here we are.

Maybe Peter's parents were just caught up in the moment and reacted as the rest of the studio audience did when Hannah revealed what really happened on their overnight date this season. I can't imagine they would be ecstatic to have to think about their son's sex life, but they could just be supportive parents in every aspect of Peter's life. For that, they are definitely parenting goals — even if some fans on Twitter don't really understand their enthusiasm.

Peter's parents might have already seen an entire season of their son's make out sessions with Hannah both fully and partially clothed. Compared to seeing their son make out with Hannah in a steamy sauna, hearing that the pair slept together two more times than Bachelorette fans already thought they did, it was probably an easier pill to swallow.

Just like Hannah's parents were there for her before she made her final decision between Jed and Tyler, Peter's parents made it a priority to be there for him on the finale. When they cheered for Peter and Hannah after learning about their four romps in a windmill in Greece, it likely came from a place of general support than interest in their son's sex life. But right now, fans are living for Peter's parents on The Bachelorette.

Besides Peter's parents being supportive of his windmill adventures with Hannah, their presence and concern for him gave some fans the feels. It's not unusual for a runner-up's parents to make an appearance on The Bachelorette finale, but watching Peter's parents openly cry out of love for him was touching.

The first time fans saw Peter's parents during hometown dates, they were already charmed by the love and devotion they have for their son. It only made sense for his parents to make another strong impression on fans during The Bachelorette reunion.

Peter didn't make it to the final two with Hannah, and he came to the finale special with some of the heartbreak still fresh in his mind. His parents were in the audience to be there for him in whatever way he needed, and say what you will about their windmill sex cheers because they are the supportive parents everyone needs to have.