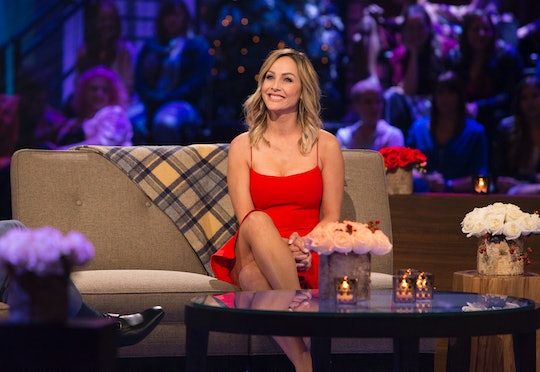 Although there’s far less of an expectation of proposing on shows like Bachelor in Paradise and The Bachelor Winter Games, it still goes without saying that most of the resulting couples aren't opposed to the idea, especially if they really hit it off in the end. When it comes to Clare Crawley and Benoit Beauséjour-Savard, that’s basically what happened once they left the show and photos of Clare’s engagement ring after The Bachelor Winter Games proves the former contestant is lucky and in love.

Much to the surprise of mostly everyone in the audience at the World Tells All special at the end of The Bachelor Winter Games finale Thursday night, Clare revealed to Chris Harrison that although she left the show before the end, she and Benoit reconnected outside of filming. Benoit contacted her to see how she was doing after her time on the show ended. Apparently this was just the push they needed to reignite their initial attraction for each other. One thing led to another and the couple was able to develop stronger feelings for each other and make things official.

Of course, things got even more official when Benoit busted out that ring and proposed. Now fans can’t get enough of the photos of Clare’s engagement ring on The Bachelor Winter Games special. And really, who can blame them? Have you seen this thing? It's gorgeous!

If the ring is the same one listed online as a Neil Lane 2-1/8 carat 14K white gold engagement ring, then it likely cost nearly $15,000. However, since Bachelor engagement rings of the past have ranged from $50,000 - $100,000, the ring could have been even higher, depending on the stones and other details that went into it. Either way, Benoit was able to propose to Clare with a serious rock and fans are loving it.

It’s not very clear whether The Bachelor franchise foots the bill for these rings or if Lane simply donates them to the show for the free publicity, but in most cases, the men of the franchise do not pay for the rings themselves. Back in The Bachelor Season 2, Aaron Buerge made the decision to pay for the engagement ring himself, but for the most part, the contestants from the various shows in Bachelor Nation have opted for the free rings because, why not?

Even for Derek Peth, who met and and fell in love with Taylor Nolan on Bachelor in Paradise Season 4, Lane provided him with the ring for his surprise proposal during the finale special, even though Derek had not been able to pick it out himself. "I did not actually meet with Derek, so it was important for me to better understand him and his personality — and of course Taylor’s as well," Lane told People at the time. "What I gathered was that he was more traditional yet he also liked the idea of a romantic ring." Lane ended up presenting two different rings to Derek for his decision, so that could be what happened when Benoit decided to pop the question after The Bachelor Winter Games.

Some viewers may have suspected that contestants Dean Unglert and Lesley Murphy were the couple to get engaged, but I can personally say that I'm so happy it turned out this way instead. Talk about a surprising twist! You wouldn't expect that two people who were no longer on the show would be the ones who set out to tie the knot. But here we are. And the photos of Clare’s engagement ring show that both Bachelor Winter Games stars are off to a good start.