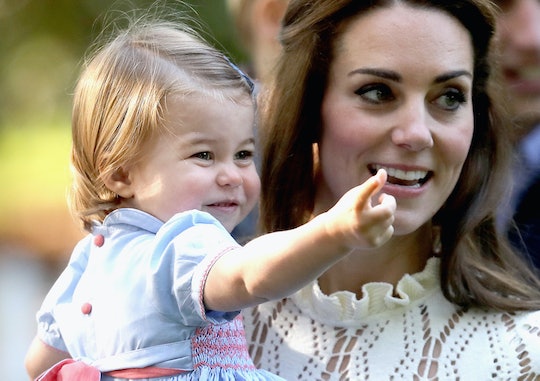 Photos Of Kate Middleton As A Kid Vs. Princess Charlotte Show The Royal Tot Takes After Her Mom

Kate Middleton's children have made plenty of headlines — in addition to garnering media attention for milestones like starting preschool, articles pop up nearly every time a new official photo of one of them surfaces. With pretty high-up spots in the royal line of succession, it's no wonder the public has such a fascination with the royal tots. Not to mention, Middleton's son, Prince George, and her daughter, Princess Charlotte, are both unbelievably cute. That being said, comparing Kate Middleton's childhood photos with Princess Charlotte's childhood photos shows that the royal toddler definitely takes after her mother.

Even though Kate Middleton was not famous when she was a child (unlike her husband Prince William), there are still plenty of photos of her as a kid floating around on the internet. The pictures were released by her family in conjunction with her 2011 wedding, aka the Royal Wedding. It's not too surprising that the public's interest in her childhood piqued when she and Prince William announced they planned to marry each other. In fact, the same thing is happening right now with childhood photos of Meghan Markle, who is engaged to Prince Harry.

Princess Charlotte was born on May 2, 2015, meaning she'll be turning 3 years old in less than two months. When she was about 1 month old, Kensington Palace released this close-up photo of the princess' face:

There are no public photos of the Duchess of Cambridge at such a young age, but you can view a few in this Daily Mail article. Is it just me, or do Middleton and Princess Charlotte look pretty similar?

By the time Princess Charlotte was about 1 year old, Kensington Palace had already released many photos of the cutie — many of which Middleton took herself!

From the blue eyes to the windswept dirty blonde hair, it's clear from age 1 that Princess Charlotte is totally her mother's daughter. Here is Middleton at 3 years old on a family vacation in the Lake District:

As Princess Charlotte continues to grow older, she looks even more like her mom. She often wears her hair pinned to the side — a look that Middleton also wore as a child. Here's a recent photo of Princess Charlotte:

And here's a photo of Middleton (left) on vacation with her sister Pippa and their father in Jerash, Jordan, according to Getty Images.

As Princess Charlotte continues to get older, her hair continues to transition to a slightly darker shade of brown — much like her mother's did. When Middleton was a child, she could almost pass for a blonde. Nowadays, her hair is chocolatey brown (not to mention, it always looks flawless), so it won't be a surprise if Princess Charlotte's hair keeps darkening.

Here's a photo of Middleton at age 5. Her hair was still much lighter than it is today, but you can tell that it had already started to darken.

Also, I need to take a second to talk about the smirks in those last two photos. Is it just me, or do 5-year-old Middleton and Princess Charlotte have nearly identical smirks? Seriously. Princess Charlotte's facial expressions totally take after her mother's.

But what about present-day Kate Middleton and her daughter? Princess Charlotte doesn't look as much like her grown-up mom as she does the young version of her mom — but dang, this whole family just looks so pretty together.

All that being said, it will be interesting to see if the princess winds up looking more or less like her mom as she grows up. Plus, Middleton and Prince William's third baby is due next month — so here's hoping many more adorable family photos are on their way.