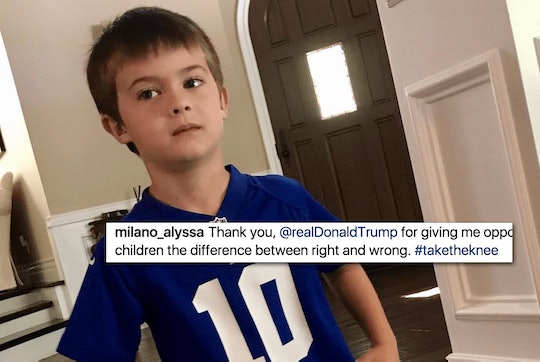 Week three of football season officially kicked off on Sunday, with eight NFL teams taking to the fields. It couldn't be a more divisive week in the sport, as support both for and against Colin Kaepernick's "taking a knee" during the playing of National Anthem has transformed into a widespread movement that has brought issues of police brutality and white supremacy once again into national discourse. After President Trump weighed in on NFL players taking a knee in protest, the movement has exploded — and the influx of photos of kids taking a knee in support of the protest will fill you with love and tears.

All across social media, parents shared photos of their kids taking a knee in front of their TV screens on Sunday. There were also incredibly powerful photos of kids playing youth football taking knees at their own community games, as well as kids from other sports joining in #TakeAKnee protests all across the country. Even the children of celebrities joined in the protest, as actress Alyssa Milano posted a photo of her son taking a knee on Instagram. "Thank you, @realDonaldTrump for giving me opportunities to teach my children the difference between right and wrong," Milano captioned the photo, adding the hashtag #taketheknee.

Whether you call it "Take a knee" or "Take the knee," the protest is incredibly important on a national level — from all sides. It doesn't matter if you support the protest or not: The issue at stake is the American and First Amendment-protected right to protest. Kaepernick and other NFL players have as much right to take a knee in protest of causes and issues important to them as those who oppose the "take a knee" movement with their own protests.

While the "take a knee" movement was initially about police brutality, as Kaepernick himself explained, it has become something much bigger and more profound about the fundamental right to dissent in America — and I think it's an important value and a dialogue parents ought to have with their children.

The take a knee movement matters. What's particularly important to understand is that "take a knee" was never about patriotism or veterans or respecting the flag — as much as the president wants to hijack the narrative away from police brutality and racial disparity. It's easy to get caught up in competing notions of what the "take a knee" movement is really about, but just as much as Trump's presidency has shown, it's unearthed issues about race, class, and power in America — and yes, we should be talking about these things with our kids, no matter how difficult these conversations might be.

The take a knee movement, especially in the wake of Trump calling Kaepernick a "son of a b*tch" at a public rally in Alabama, has forced America's hand about issues that have been long simmering since Trump took office, especially when it comes to issues of white privilege. Just last month, Trump said "both sides" were to blame for the Charlottesville attack, implicitly giving neo-Nazi and white nationalist groups a pass on violence against peaceful protesters. Now, barely a month later, Trump slammed Kaepernick for peacefully protesting — as is his First Amendment right. For someone who took an oath to defend the Constitution, Trump sure has a piss poor understanding of it.

Even though it might seem like kids have no business participating in the take a knee protest, it's an important lesson for them to learn about their right to dissent at an early age. For some kids, the take a knee protest might just be their very first lesson in American civics. As the football season continues, these surely won't be the last photos we see of more and more people participating in the take a knee movement — including children. Encouraging your kids to proudly exercise their First Amendment rights might just be one of the most patriotic things you can teach them.