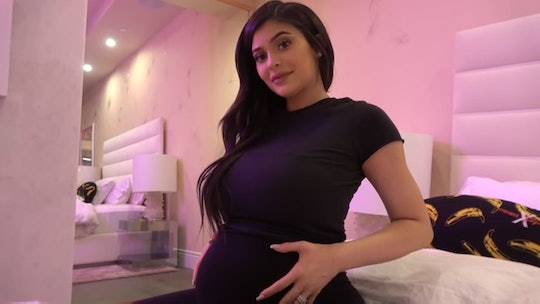 Since announcing the birth of her baby girl, Stormi Webster, earlier this month, fans have been anxiously awaiting updates from Kylie Jenner about how things are going. The new mom has yet to share any full photos of her baby girl yet and while I can't wait to see her newborn's face, that's OK — I've been contenting myself with photos of Kylie Jenner as a baby in an attempt to distract myself until that big reveal.

On Wednesday, a fan asked Kylie on Twitter how Stormi was doing. The makeup mogul replied, "she’s good still staring at her all day. she looks just like me when i was a baby." See? My plan isn't such a bad one then if Kylie herself says that her baby looks just like her. Luckily, the Kardashians and Jenners are the absolute best when it comes to documenting their lives. Not only have they been doing their reality show for over a decade, family videos and going through old photo albums is sort of a favorite pastime of theirs.

On the show, they often use old videos that Kim, Khloé, and Kourtney's father, Robert Kardashian took of them on big days, and the sisters all post throwbacks all the time, showing the world that they were simply born this way. There are actually so many pics of Kylie as a baby swirling around the internet that it's hard to pick just one. So here's a bunch.

Right after Kylie announced the birth of Stormi, her dad, Caitlyn Jenner, just had to share a picture of her as a baby.

Khloé shared this pic of her dad holding Kendall and Kylie as babies, proving that there wasn't any bad blood between them after Kris Jenner married Caitlyn.

This pic of Kylie at one of her earliest birthday parties is too cute. Maybe she should bring party hats now that she's a mom, too.

And A Glamour Queen

This, friends, is what we call being "extra."

Although she's a little older here, she's still pretty little. As always, she just seems to want to the cameras to go away so she can live her life.

Kendall says her sister looks "creepy" in this picture, but I just think she looks comfy in her PJs.

Kendall and Kylie have been inseparable since day one.

Kris Jenner is a parenting genius for both of these 'dos.

Whenever you start to think that the Kardashians and Jenners just have it all together, please remember this photo proving otherwise.

Kris lets no detail slip past her when it comes to clothes and costumes.

When you look at pictures of all the Kardashian women (and Rob), the resemblances to each other are uncanny. The same is true for both Kourtney and Kim's kids. It's pretty much a given that Stormi and Khloé's kids will also have that same...something.

Kylie's been pretty quiet on social media, simply posting that first picture of Stormi's little hand and some selfies. On Twitter, she even asked her followers on Wednesday, "sooo does anyone else not open Snapchat anymore? Or is it just me... ugh this is so sad." The lipstick queen added, "still love you tho snap ... my first love." So this phase of laying low and just watching baby Stormi is really taking over.

She's hinted before that once she had children she would quit social media altogether and just quietly live the rest of her life away from cameras in Malibu somewhere, which just doesn't even seem possible for her at this stage of her life. Given that she's still tweeting and checking Instagram, I bet it won't be too long for an actual pic of Stormi to come. Until then, though, I'll content myself with Kylie's own baby pics and ridiculous '90s baby fashion.