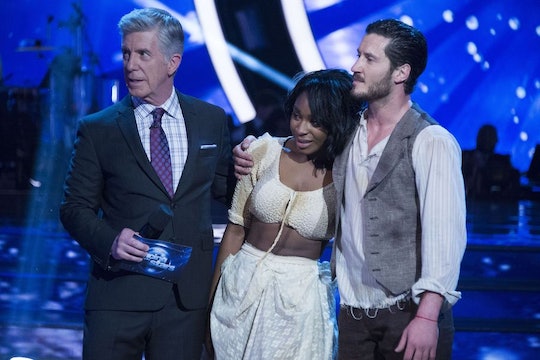 After spending several weeks learning to dance and giving so many hours to the competition, you have to assume that some of the Dancing With the Stars couples get closer. So naturally, the photos of Normani Kordei and Val Chmerkovskiy show how close the DWTS pair have gotten over the season. And with Season 24 coming to an end in a couple of short weeks, it’s important to savor these special bonds now more than ever. Because pretty soon, it will be gone from our television screens.

Earlier in the season, Kordei posted an adorable photo on Instagram of the two of them behind the scenes of DWTS with the caption "It's week 4 and I'm still in awe from last night, he makes this #DWTS journey that much better, I wouldn't have asked for a better partner, just keep holding on, we got this #teamvalmani." Even if nothing romantic comes from Kordei and Chmerkovskiy pairing up on DWTS, at the very least, they have had to chance to get closer on a real level and create an everlasting friendship.

On Chmerkovskiy’s own Instagram account, he hasn’t been shy about posting photos with his partner and included this in a caption with one of them: "Proud of my partner in crime Ms. Normani Kordei, your star just keeps rising, and I couldn't be happier seeing you blossom into the strong woman I see in front of me everyday. Love you girl, 3 more weeks. On a mission." Clearly, he’s been totally smitten with Kordei, even if it’s on a platonic level. And with good reason, since the Fifth Harmony member has proven herself to be a strong woman and dancer throughout the competition.

In a perfect world, Kordei and Chmerkovskiy would end Season 24 of DWTS with the announcement that they’re a couple now, but seeing the two as new BFFs is kind of a great consolation prize. Just witnessing the amount of love and respect they have for each other has been a worthwhile journey in itself.

It’s hard to ignore the age difference between Chmerkovskiy (31) and Kordei (soon to be 20), so maybe a romance isn’t really in the stars, but that doesn’t mean that the chemistry they have together can’t result in the Mirror ball trophy when the season comes to an end. And like I said, the thought of Kordei and Chmerkovskiy as good friends is adorable, too.

It’s only natural for the show to bring the pairs closer together and apparently, Kordei and Chmerkovskiy have been no different on DWTS this season. Now, together, they stand a real shot at the trophy this season.