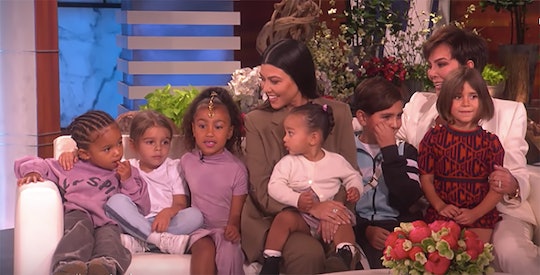 Sure, the entire Kardashian family might be made entirely up of stunning adults and even cuter children, but there's just something about this celeb kid that really tugs at the heartstrings. And photos of Reign Disick with his Kardashian cousins show off his ridiculously adorable personality.

Reign, 4, the youngest of Kourtney Kardashian's three kids with ex Scott Disick, is undeniably precious, but he has a serious side, too. He takes his cousinly duties seriously, and the preschooler was photographed in October 2018 snuggling with baby True Thompson, who was celebrating her half birthday at the time.

"He protects her," Kourtney captioned the precious social media moment, which really does look accurate from the serious look on Reign's face as he holds his arm around his smiling baby cousin.

Cute as this is, Reign — who shares his Dec. 14 birthday with older brother Mason, 9 — has lots of awesome moments with his famous cousins that have been shared with fans.

This charmer, according to his mom, was destined for a special name in utero, although Disick originally wanted to name him Preston. Good thing she changed her mind, since Reign does kind of rule when it comes to cuteness.

Speaking of cuteness, it's no surprise some of Reign's most photogenic photos with his cousins involve Halloween, since it just so happens to be one of his mom's favorite holidays. Exhibit A: This memorable 2015 Instagram shot in which Kourtney is Wonder Woman and then-baby Reign appears to be a young caped crusader, maybe Flash Gordon. North went as unicorn, which was pretty stinkin' adorable.

And who can forget the snap of Reign and Saint West from 2018, when they were dressed as Kanye West and L'il Pump from the music video for "I Love It"? It makes sense, FYI, that Reign and Saint would gravitate toward each other in the Kardashian grandchild hierarchy: The two boys are less than a year apart, according to Elle.

Some fans have postulated that Reign inherited his precious looks and confidence from his dad, which I can see firsthand. It's especially clear in this March photo of Reign with Kourtney, Kim Kardashian, and his great-grandma, MJ. Chicago, Penelope, and Saint are in the pic too, but Reign stole the show with his what are you looking at face. This looks like an expression Disick would have made as a youngin', and it's heartwarming to witness similarity.

I can't say for certain how Reign and his cousins will look like as "big kids," but I have a feeling they'll continue to be adorable, with Kourtney's youngest continuing to steal the show with his blue steel looks and impersonations of his dad.

Of course, it's definitely possible Reign may try to avoid the limelight as an older kid and adult, which would be his right. But selfishly, I'm hopeful his fam will continue to share photos of the little guy with his Kardashian cousins because he is just too cute. All hail Reign!