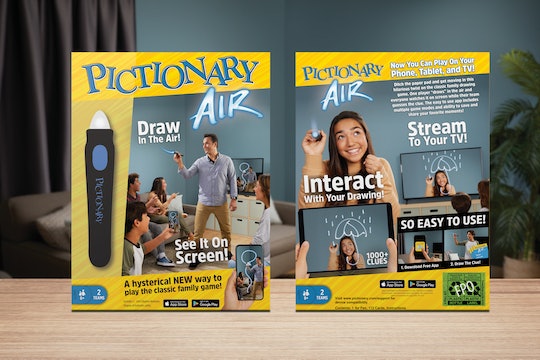 Although new playthings seem to pop up every other minute, there's also been an increased in interest in nostalgic toys and games in recent years, with kids once again clamoring for classics like Tamagotchis and Teenage Mutant Ninja Turtles in their stockings and birthday piles. Now Mattel is jumping on the vintage-update train with Pictionary Air, the high-tech sketch and guess game that gives you the fun of the classic game without using physical drawing materials. Partaking in the thrill of competition without wasting paper and creating a mess? Yes, please.

Mattel announced the new iteration of the party game go-to in conjunction with the 2019 New York Toy Fair, and Romper got the scoop on the ins and outs of this futuristic take on Pictionary. To sum up, the basic structure of the game is the same as the version you played as a kid (despite the technological twist): You and the other players split up into two teams and have to draw a word you picked from a deck of cards... but instead of drawing the word on paper, you'll sketch your chosen word into the air (literally) with the special Pictionary Air Pen, which will then connect to your smart phone, tv, or tablet and display the image on the screen of your choosing.

The modernized version also comes with different gameplay modes as well, so you have more options than just the traditional "draw until the time runs out" set up: You can give yourselves more or less time depending on your skill level to sketch and guess; record the "picturist" as they're drawing for a funny replay video that will have the whole gang giggling post-game; and save photos of drawings that you can then post to your social media or just keep for fun. I know my family always ended up shoving particularly weird drawings into drawers to look back on later, so being able to have the images on a phone instead would have come in quite handy. Just be prepared for your followers to roast your artistic skills if you do decide to post.

Pretty cool, right? The most intriguing aspect of the game to me is its appeal to both younger and older Pictionary audiences. Older players like me will be excited that Pictionary is popular again — I've been a fan since I saw the epic "baby fish mouth" scene in When Harry Met Sally — and newbies will come to the game for the smart features and fall in love anew. Seriously, it's a great game to bridge a favorite from your past with the kind of fun your kiddos crave.

You can't play the game quite yet, unfortunately. Pictionary Air will first be on sale exclusively at Target beginning June 1, 2019, and will then become available globally July 1, 2019 for $19.99. Waiting might be a bit of a bummer, but at least it's coming out at the peak of summer so you can enjoy some family game nights before the kids have to go back to school. Plus, you can practice your sketching skills on paper until then. Here's to the vintage toy renaissance.

More Like This
Spread Some Christmas Cheer In Your Child’s Bedroom
20 Stocking Stuffers For Kids Under $20
101 Advent Calendar Activities, From Books To Read To Cookies To Bake
24 Children's Books For Your Dino-Loving Kid