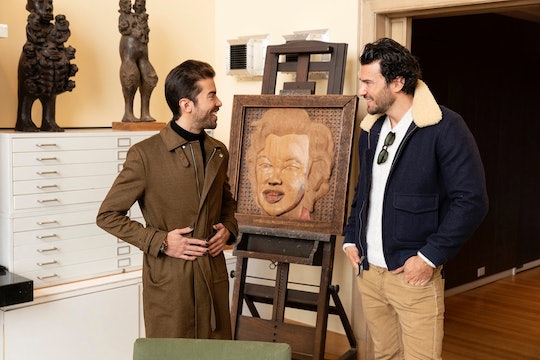 There’s nothing like parenthood to bring out the teddy bear in a new doting dad. Although Million Dollar Listing New York’s Steve Gold and his girlfriend, Luiza Gawlowska, kept their relationship and baby news under wraps for a while before it all came out, he looks happier than ever. I’m sure part of that comes from being a star agent on the show, but it's also probably because he’s a new dad. And the pictures of Steve Gold’s baby after Million Dollar Listing New York show off his softer side.

Steve has always been about keeping his team happy and motivated to sell on Million Dollar Listing New York. And while there is a certain toughness that comes with being a top real estate agent in New York City, he seems to leave all of that at the door as soon as he is home with his daughter, Rose. He told Entertainment Tonight that before his daughter was born, he struggled with figuring out how he would juggle his fast-paced career with fatherhood. But, he added, as soon as she was born, all of those concerns went away.

"I kind of had this odd sense of calmness that I never felt in my life before," he told the outlet. "I don't know how to describe it other than that. Everything is as it should be, and now we're two months in. I mean, the baby's doing great. We're doing great. It's, like, a whole new life. Something I always wanted and now I get to experience it. It's incredible."

In the two months since his daughter was born, Steve has shared photos of her on Instagram as much as the next excited new parent. I’m as guilty as anyone of oversharing posts, anecdotes, and photos relating to my kids on social media, because what parent isn't all about that humble brag? Steve is no different and it has been adorable to watch how fatherhood has impacted him outside of the show.

On Father’s Day, he shared a photo of himself in bed with his daughter and a caption wishing a happy Father’s Day to other dads out there. He wrote in the caption that "Father’s Day couldn't get any better than this" and all of the other pictures of Steve and his baby prove just how much he has embraced fatherhood.

Steve also told Entertainment Tonight in the same interview that although no one planned for Season 8 of Million Dollar Listing New York to be the season of the daddies, they have all welcomed the benefit of being able to compare notes. His co-stars Ryan Serhant and Fredrik Eklund also recently had babies and now, Luis Ortiz also has a daughter on the way. Pretty soon, Million Dollar Listing New York is going to have the alternative title of My Four Dads.

Not many fans knew about Steve’s girlfriend Luiza before the show since they kept their relationship on the down low for a while and likewise, his baby news was kept mum from a lot of people up until she was born. But this season will show how Steve and Luiza fell in love and their story, which led to the daughter they now share. More than anything else, I watch Million Dollar Listing New York for all of the real estate I will never be able to afford, but being able to see Steve’s newest journey as he falls in love and eventually becomes a dad adds something extra to the show.