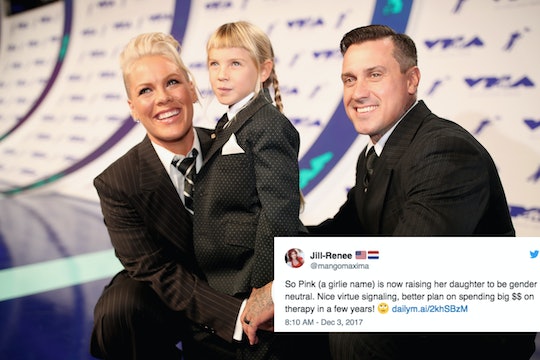 Where there is an outspoken, progressive parent, you better believe that there will also be criticism — especially if the parent in question also happens to be an international star. After Pink opened up to The Mirror last week about raising her kids in a gender-neutral household, plenty of people attacked the Beautiful Trauma singer online, with accusations of child abuse and proclamations that she lived in a "clown world" or that her daughter would come to need years of therapy in the future. But the fact of the matter is, science supports Pink's decision — and being raised in a gender-neutral household is great for kids in a number of ways, regardless of their gender identity or sexuality.

"We are a very label-less household," Pink, who is raising 6-year-old Willow and 11-month-old Jameson with her husband Carey Hart, told The Mirror over the weekend. "Last week Willow told me she is going to marry an African woman. I was like: ‘Great, can you teach me how to make African food?’"

Pink also praised her daughter's school for having gender-neutral bathrooms and had very few good things to say about President Trump (or, OK, none at all). But what critics really focused in on were Pink's comments about raising her kids in a "label-less" household:

Note: the following tweet is not only transphobic, but it's also incorrect. Gender identity is independent from sexual orientation.

A lot of the criticism, however, seems to come from a confusion about what gender-neutral parenting really entails. It's not, first of all, an attempt to raise children as androgynous — it's simply allowing kids to enjoy an upbringing free of gender stereotypes as they grow up, which means letting kids of any gender pick the toys they want (whether that's LEGOs or Barbies), the clothes they want, and the activities they'd like. It frees them from the constraints of common gender stereotypes and lets them grow up feeling secure in who they are and supported by their family.

Pink and other proponents of gender-neutral parenting aren't forcing a specific gender or sexuality onto their kids, and in fact, research shows that a large majority of children — 85 percent — raised in gender-neutral homes go on to identify as heterosexual adults (not that heterosexuality is better than any alternative outcome). Research continues to point to a strong genetic basis for both sexual orientation and gender identity, which means being raised with the freedom to explore the world unconstrained by gender won't "make" a child gay or trans, as many critics of gender-neutral parenting like to say it will.

Instead, gender-neutral parenting gives children who are LGBTQ or heterosexual a space to feel supported and safe, which is one of the best ways to raise psychologically healthy children. Because research shows that the real risk for harming children comes when parents don't accept children's gender-nonconformity.

"In many families, due to cultural and religious backgrounds, these youth are faced with resistance and anger, and many become depressed and suicidal because of feeling rejected," Victor Fornari, director of child and adolescent psychiatry at North Shore-LIJ Health System in New York, told WebMD.

And guess what? There are myriad benefits for heterosexual, gender-conforming kids raised in gender-neutral households, too. It helps free young kids of gender stereotypes that limit them, such as expecting boys to be tougher (and thus less able to talk freely about their emotions) or expecting girls to be bad at math. Entrenched gender stereotypes affect how we talk to — and interact with — children starting incredibly early on, with adults treating baby girls and boys differently when kids are as young as 3 months old.

What Pink and other gender-neutral parenting advocates are doing is simply freeing kids of those gendered expectations and giving them space to become whoever they'd like. And isn't that the sort of acceptance we should all aim for?