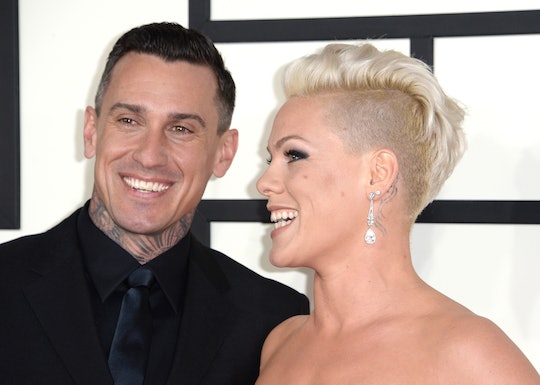 Pink Says Monogamy Sometimes Means Not Having Sex For A Year, & It's The Kind Of Honesty We Need More Of

Let's face it: no matter how hot you and your partner may have once been for each other, the ups and downs of long-term love often mean that sometimes, well, you might have to work a little bit harder to keep the spark alive — especially if you have kids. That's not exactly a reality that most people are freely willing to admit, and it definitely doesn't help that social media is full of Instagram-perfect depictions of mom bloggers with beautiful families and marriages that seem to be the epitome of #relationshipgoals. But in a recent interview with The Guardian, Pink said that marriage and monogamy sometimes means not having sex for a year, and honestly, her straight-up, tell-it-like-it-is admission is so refreshing and validating.

The singer has been married to husband Carey Hart for 11 years now, and though the couple now has two children and what seems to be a beautiful, happy life together, Pink doesn't sugarcoat the fact that it can be hard to keep a relationship going for the long-haul. And while it's not something that many people talk about, Pink explained that it mostly comes down to the fact that the reality of monogamy is that you may not always feel connected to one another.

As Pink told The Guardian,

There are moments where I look at [Hart] and he is the most thoughtful, logical, constant … he’s like a rock. He’s a good man. He’s a good dad. He’s just the kind of dad I thought he’d be and then some. And then I’ll look at him and go: I’ve never liked you. There’s nothing I like about you. We have nothing in common. I don’t like any of the sh*t you like. I don’t ever wanna see you again. Then two weeks later I’m like, things are going so good, you guys.

That's a pretty bold reveal for a celeb like Pink to make, because it's easy to hear something like that and assume that their relationship is troubled. I mean, aren't we supposed to fall in love with our soul mates and live happily ever after? But as much as we might assume that couples like Pink and Hart must live a perfect life and feel constantly in love because they always look so happy together on the red carpet, the truth is that they, like pretty much every other couple, are just two different people who have made a choice to go through life together. And sometimes that means you're just really going to get on each other's nerves.

But it's not just about getting along, or about liking on another. Like many couples, Pink said that there are times when their sex life totally takes a nose-dive, and while it can understandably be super unsettling, the truth is that it can be totally normal, and just another aspect of the ebb and flow of committed love. Pink said, according to The Guardian:

Then you’ll go through times when you haven’t had sex in a year. Is this bed death? Is this the end of it? Do I want him? Does he want me? Monogamy is work! But you do the work and it’s good again.

Few people might actually admit to these kinds of romantic dry spells openly, but they aren't uncommon. A 2014 survey by Family Circle found that over a third of women reported going a few months without having sex with their partners, while another 32 percent of survey participants said they'd gone a few years. A similar survey conducted by Parenting found that while most couples with kids say they have sex once or twice a week, 30 percent reported they have sex only once or twice a month, 10 percent said they have sex less than once a month, while another 15 percent said they rarely had sex at all.

There are lots of reasons why couples like Pink and Hart might go through sexual dry spells, and they don't necessarily have anything to do with how happy the relationship is. After all, no matter how much you love your spouse, finding the time and energy for sex on the regular can be hard when you have young children, so it's unsurprising that sex might end up taking a backseat to other things (like, uh, sleep).

For new moms, pregnancy, childbirth, and breastfeeding can leave a woman feeling differently about her body in many ways: maybe it looks different and that's affected her self-esteem, or maybe she's still recovering from giving birth — a process that can take much longer than people often think. Parents of young children can also often just feel "touched out" if they spend their days holding or nursing babies, being climbed on by toddlers, or by any of the countless other ways that parenthood can affect your bodily autonomy. And then there's the simple reality that it can take extra effort to keep the sex from getting predictable or stale if you've been together for a while, even if you don't have kids.

In 2016, a Canadian study found that couples should have sex about once a week for optimum relationship satisfaction, according to TODAY, but of course, the data doesn't tell the entire story. Couples who worry or fight about not having sex "enough," for example, are likely to be less satisfied than couples who feel more or less OK with their "every once in a while" sex lives. And rarely having sex because of a relationship problem is often a totally different issue from rarely having sex because your kids wake up at the crack of dawn each morning and you're both exhausted.

Sex can, of course, be a great way to stay connected to your partner when you're both juggling lots of responsibilities, and there's not necessarily a reason why sex and intimacy has to suffer as a result of monogamy or parenthood. But if it does, there's also no need to feel bad about it: as Pink pointed out, in marriage, sex is but one aspect of the big picture. And if the big picture still shows that you're happy and in love and on each other more often than not, the lack of sex probably isn't anything to worry about.