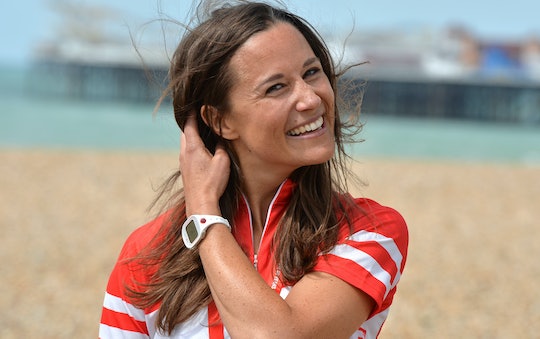 Pippa Middleton has been a bit M.I.A. in the press since giving birth to her son Arthur six months ago, which makes total sense. She's a first time mom figuring out how she wants to carve her own path as a parent. And after six months, it seems as though she's taking to one aspect of parenting like a duck to water (please forgive me, I had to). Recently, Pippa Middleton shared she introduced baby Arthur to swimming at 4 months old, which seems like such a perfect fit for them, given her active lifestyle.

Middleton is the younger sister of the Duchess of Cambridge, Kate Middleton, as we all know, and the wife of financier James Matthews. She and Matthews welcomed their first child together, baby boy Arthur, back in October of last year (and just days after she attended the wedding of Princess Eugenie and Jack Brooksbank, according to People).

Middleton works as a monthly fitness columnist for Waitrose Kitchen magazine in the United Kingdom. And after months of keeping quiet about baby Arthur, she recently wrote a column about introducing him to swimming a few months back. And as she explained in her column, little Arthur is already loving his time in the water.

"Starting my son Arthur swimming at four months old has given him confidence and enjoyment in water," Middleton wrote in her column, as People reported. "He’s now six months old, and swimming is one of our favorite activities. The exercise helps guarantee sound daytime sleeps, and the movement has improved his digestion."

While the American Academy of Pediatrics recommends starting swimming lessons for infants after their first birthday, it seems as though Middleton is enjoying her time in the water with her son purely as something fun she can do with her baby boy. "Water activity is a great form of exercise you can do with your baby," she wrote in Waitrose Kitchen, according to Marie Claire.

I can't help but picture the all Middleton cousins, including 5-year-old Prince George, 3-year-old Princess Charlotte, and nearly 1-year-old Prince Louis, all hanging out in the water with their moms for a relaxing swim. This brings me joy.

Middleton has long been devoted to fitness, even throughout her pregnancy. In fact, swimming was apparently a big part of her fitness routine while she was carrying baby Arthur. As she wrote in Waitrose Kitchen, during her third trimester she really enjoyed swimming for its feeling of "weightlessness."

"Swimming throughout pregnancy offers a wonderful feeling of weightlessness," she wrote in Waitrose Kitchen last year. "As the months pass, you feel heavier by the day, but being in water gives that floating, light-as-air feeling that soothes and relieves the body, counteracts increased back strain and stretches the legs from the growing bump. It’s non-impact, gentle and relaxing."

Pippa Middleton is clearly finding her own way as a mother. She is incorporating some of her favorite things, like swimming, into her life with her son. Because that's how we find deep satisfaction in parenting, in my opinion. To share these experiences with your little ones that you can both enjoy — it's what it's all about.