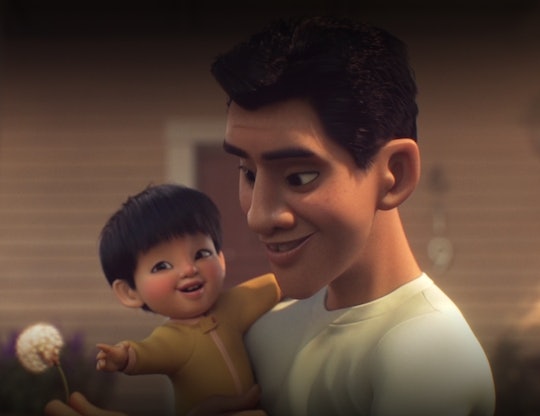 Where is the dividing line between a parent who protects their child and a parent who is limiting their potential? It's a question most parents ask themselves at one time or another. Perhaps most especially if your child is deemed "different" by other people in society. In Pixar's short film Float on Disney+, a father must come to terms with this agonizing issue. And while his story might seem fantastical it is simple and true in a way that will resonate with parents to their very core. Because we all worry, we all protect, and we all need to let go a little sometimes.

Float is the first animated short in a series from SparkShorts, films made with a six month production deadline and a small budget that are set to appear on the new streaming service, Disney+. The film was written and directed by Bobby Rubio, a Filipino American filmmaker who also worked on Pixar's Toy Story 4 and Inside Out, according to Black Film. The entire story of Float plays out in under seven minutes, which might seem like not enough time to be truly effective (particularly when there is only one line of dialogue in the entire film). But that one line of dialogue, along with the seven minutes of truly beautiful storytelling, is so impactful it will leave you sitting and thinking long after the story ends.

Float tells the story of a father and his child. It opens with the pair heading outside to play, the attentive dad watching his little one as they chase dandelions in the sky... further in the sky than this father planned, as the small child's hair is lifted in the breeze and takes flight. At first the dad is delighted to discover his child can actually float. Then the outside world invades. He becomes aware of people across the street staring, talking. He thinks of the potential danger of exposing his son's special ability to the rest of the world. They go inside and hide in the dark.

His son gets older, the father looks more beaten down by all of that protecting. All of that shielding his son from the world, trying to hide the parts of him that are different and therefore suspect to the rest of the world. He takes his son, now older and desperate to play with other kids, to the park and tries to keep him earthbound. It doesn't work; the little boy wants to float. And his father eventually learns, after a distressing outburst, that he needs to let him float. That allowing his son to be himself is the thing that matters. That he could do more damage than anyone else out there.

Rubio explained in an interview with ABC News 7 that he understands what it means to want to protect your child from the world on a personal level:

It’s based on my own personal story of my son. In the story, the father is dealing with a son that floats, which makes him different from other children.

He dedicated Float to his son and all families "with children deemed different."

Disney+ has a rare gem in the movie Float. Short and sweet and poignant. A reminder so many of us need that our kids need us to believe in them more than anything. That they need us to just let them float sometimes.