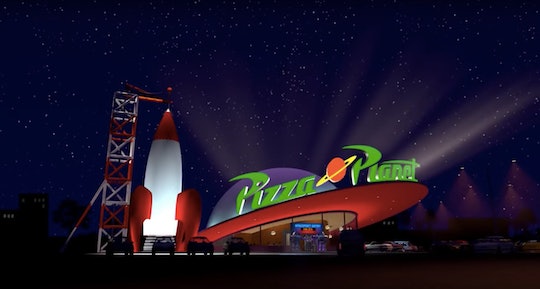 It's honestly such a great time to be a 90s kid right now. Between all the reboots of the best classic TV shows and old books being turned into movies, it feels like it's the golden age of nostalgia right now. And now, as Delish reported, the legendary Pizza Planet from Toy Story will be an actual restaurant at Disneyland, and yes, you're definitely going to want to take your kids there so they (and you, of course) can play the claw machine.

While this news is indeed exciting, Disney has not actually confirmed the reported plans and Romper's request for comment regarding the reports was not immediately returned. However, it does seem pretty clear that the amusement park is preparing to make things official, as this photo suggests. As first reported by WDW News Today, next month Redd Rockett's Pizza Port at the park will soon become "Alien’s Pizza Planet – A Better Place."

WDW News Today also reported that the revamp is "supposedly temporary," but there are doubts that that will actually be the case because the reported renovations are pretty similar to Pinocchio Village Haus was turned into Red Rose Tavern. As the site reported, it's been a year since that switch and Pinocchio Village Haus is still gone and Red Rose Tavern remains and "there are no plans to restore the Pinocchio restaurant."

So, when will Pizza Planet take over? And what can customers expect?

The change is expected to happen sometime before April 13, as that's the start of PIXAR Fest, according to WDW News Today. Although Disney World is on track to complete the highly-anticipated Toy Story Land in June of 2018, the pizza place revamp will be located in Tomorrowland. This could explain why the news outlet presumes the rumored restaurant will be temporary, because perhaps Disneyland will soon house another Pizza Planet in Toy Story Land permanently, as WDW News Today speculated.

However, the Pizza Planet reboot is also rumored to come with some friends. As some astute fans may have noticed in the title, the phrase "A Better Place" is a reference to the little green aliens in the claw machine at Pizza Planet. When the claw takes one of the little green aliens, they say that they are being taken to "a better place." So, it's pretty likely that the Disneyland version of Pizza Planet will feature some alien-themed decor — and hopefully that claw machine. Because come on y'all. Toy Story wouldn't be Toy Story without that claw machine... and Woody and Buzz, of course.

And based on Twitter's reaction, it seems like people are pretty excited and the new restaurant will be able to stand the test of time, just like the original Toy Story movie has.

Even though the news surrounding Disney's latest Pizza Planet venture is unconfirmed, and would mean the restaurant could be temporary, Disney and Pixar fans alike are all pretty thrilled that could very soon be eating at the same joint where Woody and Buzz ventured, and that creepy neighbor kid won his very own little green alien. After all, while the new revamp of Full(er) House and the fact that chokers are back in style are both great things, this Toy Story restaurant is really what 90s kids' dreams are made of. Hillary Duff reference totally intended.