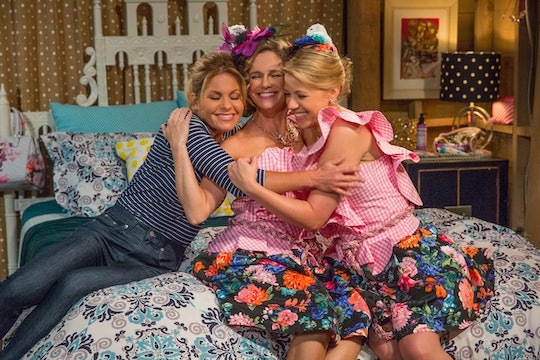 In just three seasons, Fuller House has managed to bring character and plot development at a steady pace while still including all of the family and hidden adult humor that made the original show so enjoyable for so many years. And even for those of us who plow through each season like it’s going to leave Netflix any day — spoiler alert: it’s definitely not — thinking of all of the possible Fuller House Season 4 theories is the next step in getting through the time between finishing Season 3 and waiting for the next season to premiere on the streaming platform.

One thing that’s been made abundantly, and painfully, clear is that the series is really going to be dragging out this whole D.J. and Steve thing. They’ve been teased as a potential couple since the show premiered and after going through relationships and engagements apart from each other, they have yet another roadblock in the form of Steve’s L.A. Lakers job opportunity to further prevent them from starting a life together.

There’s also the matter of the pretty huge announcement that almost everyone in the Tanner family — or who lived in what was basically the Tanner compound once upon a time — will be moving back to San Francisco, come Season 4. As a fan who can quote both the original and reboot like nobody’s business, this news is kind of everything to me, but it’s also going to be interesting to see how it’s handled when Fuller House Season 4 premieres. Until then, though, there are already plenty of theories about what’s going to happen next. Such as...

As much as I would love Season 4 to feature an all out wedding hosted by Gibbler Style Party Planning, the history of the show has shown us that Steve and D.J. are going to have wait a little longer for their happily ever after. That being said, an engagement isn't totally out of the question, but let’s just hope this one sticks.

At the end of Season 3, Danny announced that he’s not only moving back to San Francisco, but to the Tanner (now Fuller) home, much to the surprise and justified concern of his adult daughters. While I don’t see Danny spending the entirety of Season 4 in the house with them, I do foresee an episode centered around a new side of Danny now in bachelor mode with D.J. as the parental figure who has to give him a talk at the end of the episode in order to help him see the light.

Vicky Comes Back For Good

Now that Danny’s marriage is officially over and it’s been established that he still has feelings for Vicky, Season 4 would be the perfect time to get them together and keep them that way. I’ll never understand or forgive Full House for splitting them apart, especially after Danny’s perfect Disney World proposal.

Jesse teased the return of the Smash Club at the end of the Season 3 finale when they had their "dad-iversary" party in the space that once housed the coolest hangout spot in the San Francisco area. Since Fuller House doesn’t really have a dedicated restaurant, bar, or venue for the cast, I can definitely see Jesse and Joey realizing their plan of remodeling the laundromat into the new Smash Club.

It’s hard to say how long these seasons span, but if Kimmy is heavily showing by Season 4, then there’s a good chance that she could give birth to Stephanie and Jimmy’s baby by the end of the season. If this were to happen, it would probably take the front seat to any potential wedding (i.e. Steve and D.J.), so again, it would leave that event up for Season 5 or beyond.

Kimmy Moves In With Fernando

I totally get, and love, the current dynamic of the house with Kimmy and her fellow she-wolf pack living under the same roof, but eventually, she’s going to have to move next door and live with Fernando again. The events of Season 4 should make it possible, especially if Kimmy gives birth to Stephanie and Jimmy’s baby. This would mean that she can move next door with Fernando and Jimmy could move into the Fuller household to live with Stephanie and help her care for their new baby, much like Uncle Jesse and Aunt Becky did back in the day.

There Will Be Even More Focus On The Kids

In the original series, the kids were a big part of the storylines, and while the kids of Fuller House have had some big episodes lately, I also see Season 4 focusing even more on them, especially since Jackson and Ramona are now in high school. Plus, Tommy is starting to be just as cute, if not more so, than Michelle was at that age, earning the young actors who play him more well-deserved screen time.

Urkel Could Show Up

D.J.’s line about what Urkel is up to was a funny callback to not only another classic '90s sitcom, Family Matters, but the time when Steve Urkel showed up on Full House Season 4. If Jeff Franklin has anything to say about it, there could be a cameo in this show’s future. "I loved when Urkel was on Full House, so I’d love to see him back on Fuller House," Franklin told TVLine. "I’m good friends with Jaleel [White], and we’ve talked about it. It’s a really big deal for Jaleel to bring this character back, so I’m not sure that he wants to — but if he does decide to, this would be a great way for him to reprise the character."

Fuller House Season 4 hasn't had a definite renewal announcement just yet, but somehow it’s managed to teeter on the edge of funny and heartwarming, while giving characters actual growth, which is sometimes hard to do with a half-hour sitcom. If there is a Season 4, which there likely will be because come on, the premiere could come anytime between September and December 2018. So until then, there’s no time like the present to speculate on all of the Fuller House Season 4 theories to keep the show moving forward.