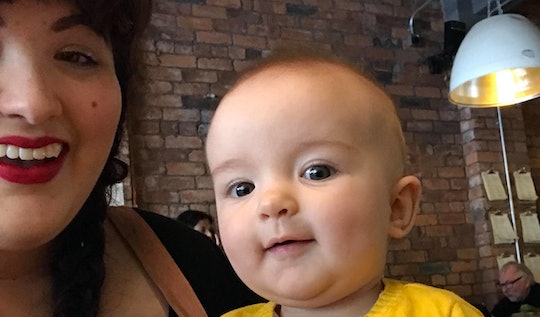 Please Stop Telling Me To Enjoy My Daughter "While I Can"

Babies can cause a tidal wave of nostalgia in parents of older children. This was certainly the case when my daughter Luna was born last December. It didn't take long before my teary-eyed mom began recounting tales from when my brother and I were small. Shortly thereafter, aunts and uncles sent Facebook messages that reaffirmed just how special raising a baby and toddler can be, as opposed to a "difficult" teen. In the nine months since, I've been told time and time again to enjoy them while they're young. "My favorite age," a random relative will announce to you, "is when they're 2."

According to friends, loved ones, and plenty of surveys, the best years of parenthood are those when our kids are little. In this first decade of life, children depend on us to clothe them and feed them and comfort them; we are needed, and cuddles abound. Then those kids start growing up, wanting to spend more time with their friends. They get into video games, or lacrosse, or hipster ax-throwing. They date, they move out, they go to college, and they eventually become independent (at least, most of the time). They don't need us in the same ways anymore — and, as a result, we can no longer "enjoy" them.

I know my daughter is only 9 months old, but this isn't a narrative that I want to buy into. Sure, Luna will only need me to this degree for a limited time. We will only be snuggled-up for so long. I just don't believe that having a child has to grow progressively less special as a result.

A couple of months ago, my partner and I visited his uncle and younger cousins — two girls ages 17 and 14. Luna was only about five months old at the time, but I already couldn't believe how much more fun being with her was as compared to her first dozen weeks on the planet. She could smile and laugh. She was beginning to recognize faces and show sweet little signs of affection. She wasn't a screaming blob, with no capacity for emotion outside of anger or discomfort. She was starting to become a little girl.

"Honestly, it just keeps getting better and better," my uncle-in-law told me as I mentioned the comments I had received. "They start developing personalities, holding conversations. You learn from them just as much as they learn from you. It's just fantastic."

This was the first time anyone had said such a thing to me. "You're even enjoying the 'moody teen' phase?" I asked him.

He laughed, admitting that he was definitely enjoying their adolescence. Any moodiness came in waves, and he was grateful to be able to share with them the things he wish he'd known when he was that age. He was fascinated by how much his daughters changed year to year, and sometimes week to week. It was hard sometimes, he noted, but it was always interesting. It was always fun, regardless of temporary frustrations.

Sure, some kids and teens go through parent-hating rebellions, after all. As their personalities develop and they begin the process of creating an ego that exists separate from their parents, their beliefs can cause a schism between those of their parents. Once children can talk, they can talk back. They can fight and complain and be rude and cruel.

Thinking back to my own early adolescence, I remember being overwhelmed by the feeling that my parents didn't really want to be around me anymore.

This may be true, but thinking back to my own early adolescence, I remember being overwhelmed by the feeling that my parents didn't really want to be around me anymore. My mom and dad were divorced. The only thing they seemed to agree on was how much they missed me being a baby. When I spoke to my partner about this, he admitted to having experienced those same feelings around 10 years old. We both drifted from our parents around that time, possibly as a result.

In turn, I want her father and I to be able to enjoy every stage of her life. I'm actually looking forward to not having to do every little thing for her. I cannot wait until she starts telling me things that I do not know. Whether it's a story about her day at school, a shape she's spotted in the clouds, or what political candidate she's supporting, I'm looking forward to learning from her. I'm looking forward to getting to know the person we've made.

Since that conversation with my uncle-in-law, I've discovered new things about my daughter, like the fact that she loves music. She shakes her head from side-to-side and wiggles her bottom whenever a tune comes on. She laughs herself to sleep at night. She can play peekaboo and reach out for us.

I don't doubt that some things will get more difficult when she gets older. As she moves out and away from us, it might be harder to hold her close, or to carry her in my arms, or find that we agree about everything. But I want her to grow, learn, and live, and I want her to know that my favorite age is whatever age I find her at.