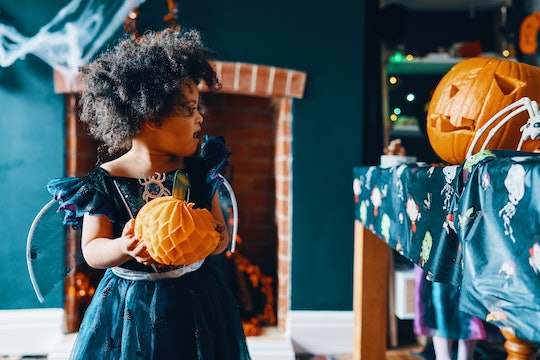 These Are The Most Popular Halloween Costumes For Kids In 2020, According To Google

While the pandemic has likely put a damper on some families' Halloween plans this year, dressing up for the spooky holiday is still very much happening. In fact, based on data from Google, some of the most popular Halloween costumes for kids in 2020 include witches, superheroes, and Disney characters. So yeah, Halloween has not been canceled.

You may see fewer people trick-or-treating, as the U.S. Centers for Disease Control and Prevention (CDC) has cautioned against it, but parents are still heading to Google for costume ideas for their kids. Every year, Google releases the top trending costume searches from the month leading up to October, and this year was no different. According to Google's data, interests this year vary between characters from Disney movies to traditional spooky creatures. Here's a look at the top trending costumes for kids in 2020:

As you likely noticed, some of these costumes are from popular movies and shows. There's Supergirl, which is a current series on The CW, the witches from Hocus Pocus, Maui from the Disney animated film Moana, Glinda from the Wizard of Oz, and Sally from The Nightmare Before Christmas. You can see the most popular costumes in your city using Google's Frightgeist map, which helps track what costumes people are searching in your area.

According to Google, you can also expect to see babies dressed up as Baby Yoda and Baby Shark. Shocking, right? Additionally, you also might see more baby pumpkins, baby tigers, and baby dinosaurs this year.

If you do decide to participate in traditional Halloween festivities this year, the CDC recommends you avoid direct contact with other trick-or-treaters, frequently wash your hands, and make a cloth face covering a part of your costume.

But let's be real, dressing up is all part of the fun of Halloween. Even if dressing up this year means having the kids parade around the living room this year and demanding a Kit Kat from grandma over Zoom.