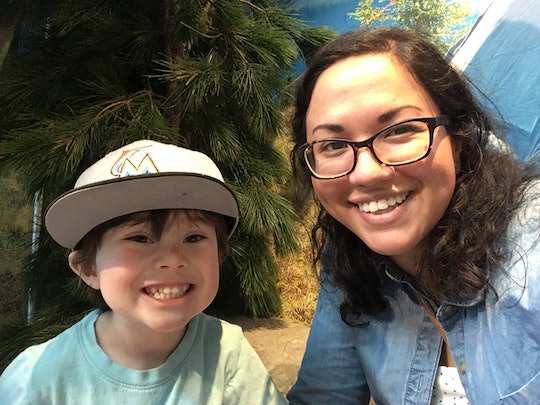 It was supposed to be perfect, those first few days of motherhood: breastfeeding without a hitch, the immaculate nursery, organic baby clothes including adorably printed cloth diapers, and me, glowing in all my maternal splendor. Everything was going to be perfect, or at least close enough. Instead, new motherhood was a disaster. I was stretched thin beyond my wildest imagination: from lack of sleep, from nights in the NICU, from my birth injuries — you name it. Not quite just stressed, not quite just experiencing anxiety. Perhaps more than anything, postpartum distress was the term to describe my struggles best — a term I came across via the Instagram of reproductive psychiatrist, Dr. Alexandra Sacks (thank you, Dr. Sacks!).

In her TED Talk, Dr. Sacks makes parallels between adolescence and the postpartum period, which refers to as a woman's "matrescence" (a term coined by anthropologist Dana Raphael in 1973).

"We assume that teenagers feel stress — that's baseline. But we know that it is such a tumultuous time in [terms of] body, mind and hormone. The same can be said for postpartum," Dr. Sacks tells me by phone.

As anyone who's ever given birth might know, your matrescence is a period of time wherein you are experiencing numerous changes — from hormonal shifts to severe lack of sleep, strained relationships, new relationships, and then some.

"You're learning to take care of a newborn, and newborns are very dependent ... Its a 24/7 job with no breaks, so its stressful in any category you can think of," says Dr. Sacks, who is co-author of the forthcoming book What No One Tells You: A Guide to Your Emotions from Pregnancy to Motherhood.

The postpartum depression label often doesn't seem like it fits.

In general, we tend to hear more about postpartum depression (PPD) than anything else when it comes to our postpartum mental health. And even then, you mostly hear about the tragedies, the extreme cases: the mother who harms her baby, the mother who dies from suicide, leaving her babies behind. It’s no wonder so many mothers suffer in silence when they’re struggling mentally and emotionally after having a baby (even Chrissy Teigen took her time to figure out her PPD).

But the postpartum depression label often doesn't seem like it fits. This is why terms like "postpartum distress" or "matrescence" can be so helpful. They allow us to find new language that is better fitting, especially if we are not experiencing a major depressive disorder.

"If you don't meet the clinical criteria, you probably don't have postpartum depression," says Dr. Sacks.

But that doesn't mean life is a piece of cake.

There are other types of mental-health issues that pop up just after you give birth, or even in the weeks and months that follow; part of the reason some mental health professionals (including Dr. Sacks) prefer to talk about perinatal mood disorders, rather than using postpartum depression as an umbrella term. Among the many things that can affect new moms, there’s postpartum anxiety, postpartum obsessive-compulsive disorder, postpartum post-traumatic stress disorder, even postpartum bipolar mood disorder. These are experiences that are pathological, requiring attention from a trained psychologist.

But then there is the simple stress of immense change and growth — not in and of itself a disorder, but taxing all the same.

Between hormonal changes, the added responsibilities of becoming a parent, and the additional challenges if you experienced a birth injury, if your baby was sent to the NICU, if you’re low-income, if you’re in an abusive relationship, if you're sleep-deprived, if you don't have enough emotional support — all these things can accumulate to make that first year the hardest it’s ever been.

And I know, because I experienced many of these things all while becoming a mother.

With my first pregnancy, everything was stressful from the get-go. It was unplanned, with a boyfriend I didn’t know too well yet (and who quickly became my husband). I was fired from my job because I had to miss a few days of work after a threatened abortion (that is, when you inexplicably bleed during pregnancy). Money was tight. Add the stress of moving cities, to somewhere I knew no one. And then of course I had trouble finding a new OB-GYN so that when I started bleeding again, no one wanted to give me proper care (I was turned away twice at a hospital and told everything was “OK”). I gave birth prematurely, and then my baby died. It’s hard for me to imagine a more difficult birth and postpartum experience.

I was anxious. I was moody. I was struggling. I was scared. And this is what postpartum distress was like.

When I got pregnant a second time (with my son), I truly thought that maybe, just maybe, it would go well. While I was still going through some grief, I was doing much better, postpartum, than I had with my daughter. I hoped that things would be easier. I had family and friends nearby as we’d moved back to my hometown. I had better, more vigilant prenatal care. I read the books and did the research. This time it would be OK.

And then my son literally ripped his way out of my body and into my life. I suffered fourth-degree tearing, and it’s a miracle I’m mostly alright now physically. But that was the least of it. My son aspirated meconium and was diagnosed with persistent pulmonary hypertension. I saw my son for a total of maybe 10 minutes on his first day of life, and then he was taken across town and held in the NICU with strangers (strangers who were working to save his life, but nonetheless strangers). It was really, really hard to handle.

I know I must have been going through various postpartum struggles at that point, but once my son made it home (two months later), my struggles shifted. I was grateful, and ecstatic, to have him home. But the novelty wore thin quickly as I pushed myself to pump breastmilk out in vain every two to three hours. I never produced even an ounce at a time, while my son wanted more and needed supplementing.

Then it was just the whole fact that I was needed constantly. He needed me to change him, feed him, burp him, sing to him, bathe him, play with him, do the tummy time thing, set appointments (and then take him). My husband did what he could, but he also worked full time. My mother did what she could, but sometimes I just wanted her to back off. I was too broke to hire other help. Back then we were living on SNAP and WIC benefits. I was anxious. I was moody. I was struggling. I was scared. And this is what postpartum distress was like.

I was depressed after losing my daughter, but this was a different feeling. I had no fear or even thoughts about harming my baby. I had no thoughts about harming myself. I was just exhausted, worn the hell out, and finding every single thing to be way more difficult than it needed to be or that it was. Distressed is a word that perfectly encapsulates how I felt. Anxious, but more than that. In physical pain, but more than that. I was grappling with how on earth I’d ended up a mother, and one who could barely afford diapers, let alone all the other things I needed and wanted to give my child.

Perhaps if we start using the word 'distressed,' a term that many folks can relate to, and one that doesn’t carry the same level of stigma as other words, we can help more mothers identify their mental health issues and get help.

It took some time to finally dig out of this hole. I began writing and working again. I made sure to take more time to socialize outside of the home, and sometimes even away from my child. I started putting myself first sometimes, fighting the urge to be the eternal martyr as I was raised to believe mothers should be. And I got some help. I went to therapy, and picked up yoga again (which is my other form of therapy). Slowly, I fell back in love with parenting my child, and at peace with everything that led up to that point. But no, it wasn't easy.

Perhaps if we start using the word "distressed," a term that many can relate to, and one that doesn’t carry the same level of stigma as other words, we can help more mothers identify their mental health issues and get help, or to ease their burden simply by acknowledging it. New moms are rarely asked how they’re actually doing by anyone other than perhaps a supportive spouse or a mom-friend who’s already been there. Even OB-GYNs and other care providers sometimes miss the opportunity to truly talk and actively listen to new moms and their concerns, and in the process can miss red flags.

But maybe if we say that we’re dealing with postpartum distress, we can create space to listen to and support women who don't have a medical issue, but are still finding the going rough. Maybe a better understanding of the grey area between bliss and clinical depression in that first year or two — the "matrescence" — will allow parents to acknowledge that it is hard, rather than feel they have to have it together from day one, and to feel empowered to ask for help. Maybe language that appreciates how things really are will allow us to actually enjoy this brief and magical time with our new babies.