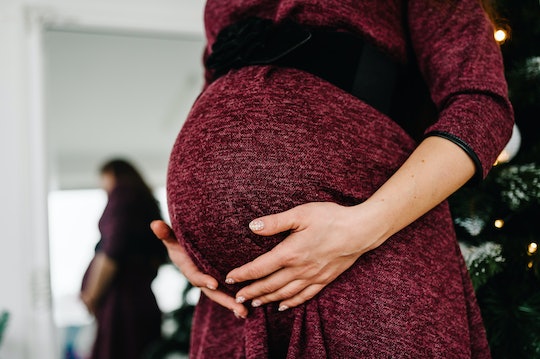 Pregnant At A Holiday Party: My Inner Monologue

An evening in December. It's freezing and, under normal circumstances, my pregnant ass would already be in fuzzy pajamas eating a second microwave pizza, with grand plans to marathon-watch something brainless before falling asleep 30 minutes in. But no. Instead, I'm pregnant at a holiday party, and if I have to suffer through this holly jolly nightmare I'm taking you with me.

Here I stand — behold me in all my glory! My ankles are swollen even in my ugliest, most sensible shoes. My ever-growing tummy is squeezed into a velvet horror show of a party dress that I hate, but it's the only one I found that fit. Every time I thought I'd found a tasteful black maxi dress that could accommodate the bump, surprise. It's a jumpsuit! Even if I could manage to fit into one of those things while pregnant, my ever-expanding belly pulling all the material up and to the front means the wedgie that ensues would make my pregnancy induced hemorrhoids unbearable.

And in the front? Honey, that camel toe would to be so pronounced people would wonder if I was an actual camel who escaped the lobby nativity scene.

This is to say nothing about the fact that if I had to pee (and, LOL, I'm pregnant so of course I'll have to pee) I'd have to get completely naked every single time I make my way to the restroom. No thanks. So, fugly velvet dress it is.

At least I'm getting my money's worth out of said dress, though, because this is approximately the 47th social event I've had to attend in the last three weeks, because 'Tis the Season or some such nonsense. Look, I appreciate that someone went through the trouble to throw a party, but even when I'm not pregnant that siren song of microwave pizza and an 8 p.m. bedtime is a-calling my name. And these days? Well, these days I'm uncomfortable, emotional, generally cranky, and gassy AF. For real: I'm farting for two now, folks. Do you know how much physical and mental energy it takes to hold back all that flatulence in a party setting? It leaves me drained and makes the car ride home quite unpleasant.

Also, I don't know what UIF half these passed hors d'oeuvres are, so I'm spending half my time asking what everything is and the other half frantically Googling "OK to eat [insert hors d'oeuvre here] while pregnant?" because I don't know. And, let us never forget that I must endure all this holiday cheer completely sober. Even though I'll occasionally indulge in a small glass of wine at home, there's no way I'm going to open myself up to that kind of judgment. Not under the watchful eye Janice from Marketing, who needs no excuse to gossip about someone in the break room.

I don't want to begrudge anyone their tidings of comfort and joy. But, as a pregnant person, I would be far more comfortable and joyful at home.

Speaking of the inappropriate and judgmental things people say, being pregnant at a holiday party means that randos have zero qualms about saying them to my face! Especially when they're three liquor-laced eggnogs in. I guess I didn't read the fine print in the Manual of Pregnancy stating that my body, medical decisions, parenting plans, and most intimate, private choices are ice breakers and small talk up for public discussion and debate. Ho ho ho!

"Ha ha! Yeah, Mark: I do just keep getting bigger and bigger."

"Oh, really, was your wife's bump so itty bitty she could still wear her jeans? Wow!"

"Hmmm. I didn't know epidurals were poison, Sean. Remind me where you went to medical school?"

OMG this party is so fun when is it going to end?!

And I haven't even gotten to the worst part, which is where everyone thinks I'm a petting zoo animal specially brought to this party to be incessantly, inappropriately touched.

Pop quiz: When is the best time to touch a pregnant person's belly? Answer: Literally never unless they tell you you can.

Oh, but no one gets that memo, so I'm over here doing my best Lucky Stump at the Apollo impression. Near strangers beeline over to pat, rub, stroke, and generally manhandle my abdomen. And if I assert myself? I'll be accused of being "overly sensitive" or "touchy," so it's easier to just grin and bear it. The worst is when they just rest their hand there while talking, looking you in the eye, but you can't concentrate on what they're saying because inside you're just screaming, "Get your hand off me I don't even want to be here! I want to be three episodes into a Law & Order marathon right now!"

Look, it's not that I'm a Grinch. I don't want to begrudge anyone their tidings of comfort and joy. But, as a pregnant person, I would be far more comfortable and joyful at home.