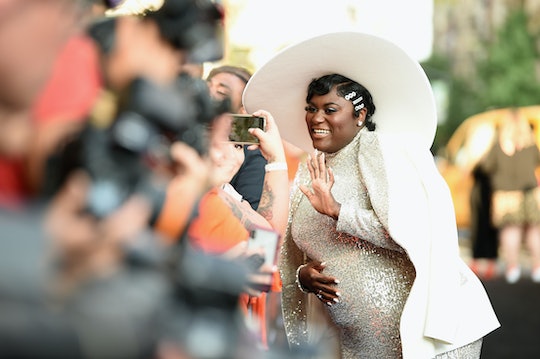 As one Orange Is The New Black star prepares to welcome her first bundle of joy, she's soaking up all of those mama-to-be pampering moments. In a boomerang shared on Instagram, pregnant Danielle Brooks showed how her makeup gets done during her third trimester and, truly, it's the definition of #goals.

On Thursday night, Brooks posted a glamorous and oh-so-relaxing peek at her makeup routine as her due date draws near. "The only way you should get your makeup applied in your 3rd trimester," Brooks captioned the boomerang, tagging her makeup artist Michael D. Patterson.

Fans and fellow celebs quickly took to Brooks' comment section of her Instagram post to all basically say, "yes mama!" As one fan commented on her post, "That’s the only way to do anything in ur 3rd believe me! I’ve been horizontal for 10weeks!! My little pumpkin is due any day." And another accurately chimed in, "Only in your 3rd trimester? More like how you should always have your makeup done everyday!" And one mom commented, "U look so comfortable! i miss those last few weeks. EVERYBODY bended at my will lol."

And GLOW actress Britney Young also commented on the post and said what's everyone, even those who aren't pregnant, are thinking: "Girl, I’m not even pregnant and this is how I want to get my makeup applied."

Back in July, Brooks announced that she's pregnant with her first child in a sweet post on Instagram. "So elated to finally share this news with you all. I’m happily pregnant!" she captioned a photo of herself smiling and holding a positive pregnancy test.

A few months later, Brooks casually revealed the sex of her baby-to-be while announcing a new social series on Netflix, A Little Bit Pregnant. "Actually, I'm a lot of bit pregnant," says in the beginning of a promo video for the series that shows of a glimpse of her sex reveal party. And it's a girl!

Beyond waiting on pins and needles for her baby girl to arrive, Brooks' fans are clearly pumped for her new Netflix series, which she said on Instagram earlier this week is all about "getting answers to all the new mom questions."

"What's the deal with doulas? What you can really eat? How do you know you're in labor? I’m talking to healthcare providers, experts, nurses and of course real moms to get the scoop on all things pregnancy and beyond," she wrote on Instagram. "It’s gonna be FUN FUN FUN!"

Brooks, who starred on Orange Is The New Black as Tasha "Taystee" Jefferson for seven seasons, previously shared with People how excited she is to share all of her experiences with her daughter. "All these pics hold a story but the photos I take tonight will mean the most, as I share them with the people who’ve become my family and with carrying my little Debbie cake inside this Taystee oven," Brooks told People at premiere of the final season of Orange Is The New Black. "It’s the end of an era, and the beginning of so much more."

And now that she's in her third trimester, it will only be a matter of weeks before she takes on her new role as mama to her baby girl. Until then, though, hopefully she's soaking up all of those pregnancy pampering moments.