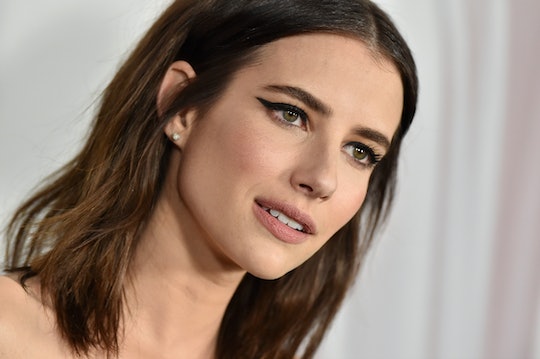 Emma Roberts Revealed Why She Blocked Her Mom On Instagram & LOL

After she accidentally, but most "definitely spilled the beans" about some pretty big news, Emma Roberts revealed she blocked her mom on Instagram. But why would the Scream Queens star take such a drastic act against the woman who raised her, you ask? Well, let's just say her reason was one that might be familiar with anyone with parents who don't quite understand the juggernaut that is social media. Or celebrity pregnancy reveals.

Roberts announced back in August that she and her boyfriend Garrett Hedlund are expecting a baby boy together with a cute little Instagram photo shoot featuring her baby bump. There had been rumors that she was expecting before her big reveal, and it seems her own mom, Kelly Cunningham, didn't help with the rumor mill. Since she was apparently just out there casually telling her Instagram followers that her daughter was pregnant.

The American Horror Story star told Jimmy Kimmel during a recent appearance on Jimmy Kimmel Live! that her mom rather forced her hand when it came to her pregnancy reveal. "I was keeping my pregnancy pretty low-key," Roberts said. "Unfortunately, my mother has Instagram. Mothers and Instagram; it's a bad combination. And she definitely spilled the beans."

The actress went on to explain that her mom "doesn't own a computer, and she had a flip phone up until two years ago," so Roberts bought her an iPhone for Mother's Day so the two of them could FaceTime together. "It was such a Love Fest," she told Kimmel, "and it was the worst thing I ever did."

Once her mom got Instagram, things seemed to spiral. At first, Cunningham had just a few hundred followers but once she had a few thousand, Roberts explained, "she had no idea what she was dealing with."

Cunningham's confusion ended up seeing her interact with Roberts' fans to the point where she was "thanking them for all their pregnancy wishes," even responding "yes" when a social media user asked if her daughter was pregnant, according to Us Weekly. Before she had shared the news herself.

After she explained to her mom that she revealed her pregnancy "we kind of laughed, we kind of got in a fight, I blocked her at one point." After going through an "Instagram war" with her mom, Roberts has decided to be philosophical about it all. "It's a good story to tell the baby," she told Kimmel.

Now that the world knows about Roberts' pregnancy, the actress and her mom can take a breather for a bit. Until the baby arrives, that is, and then I suspect Emma Roberts is going to have to keep a weather eye out for her mom's Instagram posts.