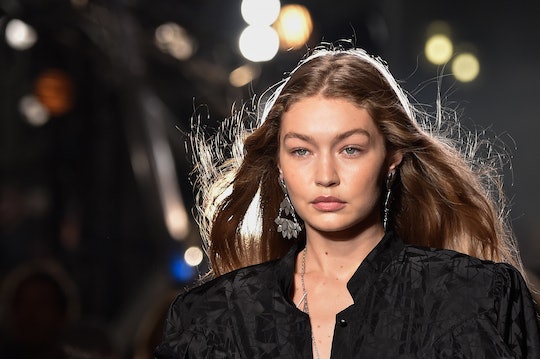 A lot changes when you're pregnant. Beyond your growing belly, certain foods are considered risky and certain activities should be avoided. For instance, Gigi Hadid revealed she's "missing" horseback riding during pregnancy, but she's managed to still safely enjoy a little equestrian fun as she waits for her first child to arrive.

The 25-year-old model, who confirmed in April that she's pregnant with her and Zayn Malik's first child, revealed on Twitter over the weekend that she's been missing horseback riding lately after a fan asked her, "Have you been on a horse (for a safe ride) since you are pregnant? Or are you avoiding it?"

"Early on I did (only walking though) but not anymore," Hadid responded on Twitter. "Missing it!!"

Hadid has spent a lot of time during her pregnancy at her family's farm in Pennsylvania, according to Refinery 29. In March, Hadid told Harper's Bazaar that living on the farm has made her remember life's simplest pleasures. "It's allowed me to fill my days off with the little things that make me happy, like art, gardening, yoga, cooking, being outside, spending time with my loved ones and animals without having to worry about things like what I'm wearing or how my hair looks, or being photographed or seen that day," she told the magazine.

Although she's been avoiding riding horses at the farm lately, she's still spending time with her animals. "I still hang out with them and bring them carrots," Hadid tweeted.

Hadid and her sister Bella have loved horses since they were young girls. Hadid's mother, Yolanda, revealed on Instagram in 2017 that her oldest daughter's "first love" was horseback riding and Hadid has shared videos showing off her impressive riding skills.

Although a hiatus from horseback riding must be tough for Hadid, the International Equestrian Federation advises that riding a horse while pregnant can be risky. "Riding carries the risk of falling no matter how experienced the horse or rider. Hormonal changes in pregnancy lead to joint laxity and hypermobility, which may affect riding ability," the International Equestrian Federation says on its site. "In the first 12 weeks of pregnancy the uterus is protected within the pelvis and direct trauma to the fetus is reduced, however, maternal trauma requiring a general anesthetic increases the risk of miscarriage early in pregnancy."

But it won't be long before Hadid can ride again. Her mom told Dutch news outlet RTL Boulevard in April that Hadid is due some time in September. In the meantime, beyond feed carrots to the horses, Hadid said during an Instagram Live in July that she's writing in her journal "a lot" and "just [wants] to experience" her pregnancy.