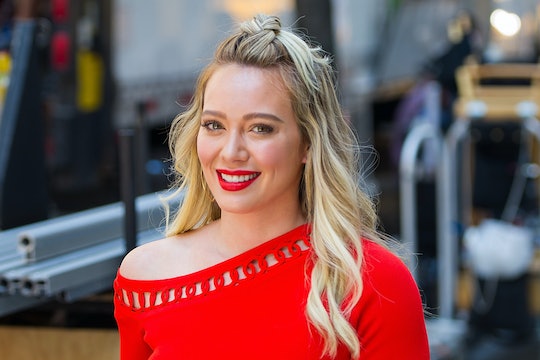 Like so many of us right now, Hilary Duff, who's pregnant with her third child, is doing her best to cope with her nerves as the nation prepares for a monumental presidential election on Nov. 3. In what looks like a just cute bump photo at first glance, the 33-year-old actress revealed she's turned to a little "stress eating" to get through this significant moment in history.

"Stress eating 'bout tomorrow," Duff captioned her new photo, posted to Instagram on Monday. "What you getting into?" In the selfie, the Younger actress wore an all black outfit in the photo — with her bump in full view — while she stuck one hand in a bag of Old Dutch ketchup flavored chips.

Duff is hardly the only person feeling stress related to the election between President Donald Trump and former Vice President Joe Biden. A survey conducted by the American Psychological Association found that 68% of adults in the United States feel that the upcoming election is a "significant source of stress." And a poll conducted by the Harris Poll in October found that 46% of respondents said that they would be eating junk food as the election results roll in. So follow Duff's lead and eat some chips straight from the bag.

Savory or sweet, do what you gotta do to cope with this week's stress.