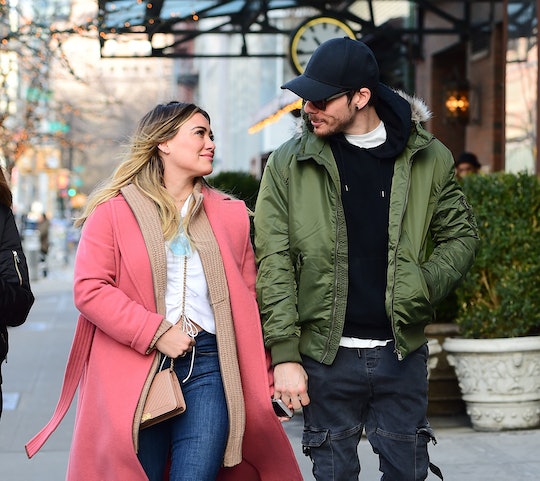 Over the weekend, the actress shared a sweet video of her husband, Matthew Koma, rubbing her growing bump while she smiled into the camera. "We are growing!!!" Duff captioned the cute reveal video on Instagram. "Mostly me..."

Duff and Koma are already the parents to their 2-year-old daughter, Banks, and Duff shares her 8-year-old son, Luca, with her ex-husband Mike Comrie.

"Lol quarantine was fun," Koma wrote in the caption of his Instagram post announcing their exciting news. "Baby #3 — 2021."

They're not the only ones who are excited; Duff's famous friends took to the comments of her post to congratulate the couple on their big news. "Yay!! The best news!!," actress Mandy Moore, who is also expecting, commented on the photo. "Love you two and can't wait to be mamas together! Xo."

Beyond that she's due in 2021, Duff didn't reveal too many details surrounding her pregnancy in the announcement. But one thing is for certain — 2021 is going to be especially busy. In addition to a little one on the way, actress has a children's book coming out in 2021 and she is currently filming Season 7 of her show, Younger, in New York City.

Over the summer, Duff had opened up about the possibility of expanding her family in the future during an interview with People in July. "It's tough because everything is so uncertain," she told the magazine. "Like, is it safe to have a baby right now? We don't know. Can we hold on for two years or is work gonna be crazy? We're always kind of talking about it and toying with the idea, but nothing too serious yet." Well, it looks like those talks must have gotten a little more serious.

While Duff has said in the past that Luca is such a "loving" big brother to his little sister, Koma wrote on Instagram that he can't wait to watch their daughter guide her new sibling through "how to get Sprinkles for breakfast." Awwww. Now this is really what dreams are made of.

More Like This
Ireland Baldwin Shares Her Abortion Story In An Emotional TikTok
Jennifer Lopez Shared A Super Romantic Video Of Ben Affleck To Celebrate Father’s Day
Catherine Reitman Calls It Like She Sees It: “Being A Working Mother Is Impossible”
10 Ways Prince George & Prince Louis Are So Different From Each Other